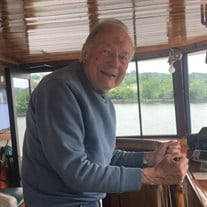 Troy-William J. Wason IV, 90, entered peacefully into Eternal Life on Sunday, June 6, 2021, surrounded by his loving family. Born on August 16, 1930, Bill grew up in Sheepshead Bay, Brooklyn, and in Garden City on Long Island, New York. After high school, he attended the Wharton School of Economics at the University of Pennsylvania, where he was a member of the Varsity Crew Squad. He interrupted his studies in 1951 to serve his country for four years in the Korean War. Bill served in the Air Force, where he attained the rank of Staff Sergeant and earned the Korean Service medal with three Battle Stars. Upon his return to civilian life, Bill continued his studies at the University of Pennsylvania and graduated in 1956 with a Bachelor of Science in Economics. In 1958, on a blind date, he met the love of his life, Marieanne. They wed on October 11 of that year and began their life together in Hollis, Queens. Bill furthered his education by earning a Master of Business Administration degree from New York University in 1962, the same year that he and Marieanne welcomed their daughter, followed by a son in 1965. Bill spent his career in the challenging environment of Wall Street as a Securities Analyst. His keen mind and powerful work ethic earned him membership as a Senior Security Analyst in the New York Society of Security Analysts. Bill’s areas of expertise included the coal industry, the automotive industry, and his great passion, the food industry. He was employed for the majority of his career by Brown Brothers Harriman. Upon retiring after a long and successful career, Bill enjoyed travelling with Marieanne to destinations all over the world. Bill’s Scottish lineage included several sea captains, and throughout his life he enjoyed the ocean and boating in any form, as well as fishing. He also continued to compete in shell racing as a member of the Sagamore Rowing Adult/Masters team. Bill and Marieanne raised their family and continued to enjoy their home near the beach in Centerport on Long Island for well over fifty years before relocating to Troy, New York. Bill was an avid opera buff from the time he was in high school, and for many years held a season subscription to the Metropolitan Opera. Wagner and Puccini were two of his favorite composers. Bill will be remembered first and foremost for his immense love of family. He was at his happiest when sharing a good meal with his loved ones. He will be remembered for his generosity and kindness, his love of adventure, and his toughness in the face of challenges. Bill was pre-deceased by his parents, William and Ethel (Van Arsdale) Wason, his sister June (Wason) Williamson, and his granddaughter Sarah (Chapin) Knight. He is survived by his loving wife of 61 years, Marieanne (Peymann) Wason, his daughter Linda, his son Bob, son-in-law Joel Chapin, daughter-in-law Jill Baucom, grandsons Ben, Ian, and Lucas Chapin, grandson-in-law Tanner Knight, granddaughter-in-law Hikari Morikawa and Ian's partner Courtney Leo. Bill’s family would like to thank his nurses and health aides Amanda, Debbie, Krissy, Davelle (Dee), and Dagna, as well as Community Hospice of Rensselaer County for their loving and compassionate care. Relatives and friends are invited to visit with Bill’s family Wednesday, June 9, 2021, in the McVeigh Funeral Home, 208 N. Allen St., Albany, NY 12206 from 4 pm to 7 pm. Bill’s Funeral Service will be Thursday, June 10,2021 at 11:00 am in McVeigh Funeral Home, Albany. Interment will follow the service at 1:30 pm in Gerald BH Solomon Saratoga National Cemetery, Schuylerville, NY with full Military Honors. In lieu of flowers please donate in Bill’s memory to Rensselaer County Hospice 295 Valley View Blvd., Rensselaer, NY 12144. To leave a message for the family please visit www.McVeigh FuneralHome.com.

The family of William J. Wason IV created this Life Tributes page to make it easy to share your memories.

Send flowers to the Wason family.