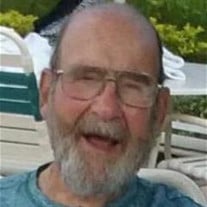 Albany – William “Bill” Lehman, 84, died peacefully and surrounded by his family on Monday, January 22, 2018 at Mease Countryside Hospital in Clearwater, Florida. Born June 24, 1933, Bill was the son of the late William Lehman and Helen Lehman (Dunn), both of Albany. Bill graduated from Christian Brothers Academy in 1952 and served in the U.S. Navy on the Destroyer USS Hickcox. After honorable discharge in 1955 he received an Associates degree from Hudson Valley Community College then embarked on a twenty five year career with New York Telephone Company as an installer repairman. Later, Bill worked for the State of New York from which he retired in 2003. In 1960, Bill married his beloved Ruth (Kulzer), with whom he had attended Our Lady of Angels elementary school. He was a most devoted father to son William (BJ) Lehman and daughter Heather Amster (Lehman). Bill’s great physical strength earned him the lasting knick-name Moose during his football days at CBA. He had a jolly demeanor and sparkling eyes. He loved joking, baking, painting, Frank Sinatra and collecting beer steins. He was a life member of the Benevolent Order of Elks. Lifelong Albany residents, Bill and his wife moved to Clearwater, FL in 2015 to be near their son. Bill is survived by his wife of 57 years, Ruth V. Lehman, children Heather Amster (Robert) of Stony Brook, NY and BJ Lehman (Joyce Clay) of Clearwater, FL, grandchildren Brendan and Elizabeth Lehman and Henry, John and Grace Amster, sister Donna Nelson (Donald) of Charlotte, NC, and many beloved nieces and nephews. He was predeceased by his brother Clifford Lehman. Relatives and friends are invited to visit with Bill’s family Friday, February 2, 2108 4:00 to 7:00 pm in McVeigh Funeral Home, Albany, NY. Funeral services Saturday, February 3, 2018 at 8:15 am from McVeigh Funeral Home, Albany thence to All Saints Catholic Church, Albany at 9:00 am where his Funeral Mass will be celebrated. The Rite of Committal will be held in Our Lady of Angels Cemetery immediately following the Funeral Mass. To leave a message for the family, light a candle, obtain directions or view other helpful services please visit www.McveighFuneralHome.com

The family of William Lehman created this Life Tributes page to make it easy to share your memories.

Send flowers to the Lehman family.