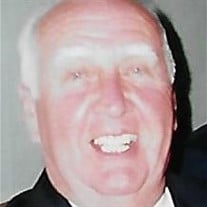 Loudonville-William Henry Cassidy passed away unexpectedly on Sunday, June 30, 2019, much like he entered this world—surrounded by peace, love, serenity—and the embrace of a large group of loved ones. He was born on September 1, 1931. A true Labor Day baby, William H. Cassidy worked throughout his life with intelligence, a dedication to excellence, a keen sense of humor, and, perhaps most importantly, generously shared wisdom about the world and the challenges, joys, and opportunities it offered. He came from a long line of Cassidys whose Albany roots go back to the 1800s, including noted builder Peter Cassidy; Lieutenant Colonel James Joseph Cassidy; and Dr. James J. Cassidy, Jr. He shared his life with his beautiful bride, Joyce Livingston Cassidy; his children Christina Cassidy (David Martino), Carolyn Cassidy Blanchet, and James Cassidy; grandchildren Benjamin Blanchet, Brenton Blanchet, Liam Blanchet, and Isabel Martino; and a host of adoring nieces, nephews, grandnieces, and grandnephews, as well as numerous cousins, in-laws, and friends. He was preceded in death by his beloved father James J. Cassidy, mother Genevieve Girvin Cassidy, and brother Dr. James J. Cassidy, Jr. He is survived by his siblings John A. "Jack" Cassidy (Virginia) of San Diego, California, and Patricia Parker of Guilderland, New York, and their extended families. Bill Cassidy was a graduate of Vincentian Institute of Albany, NY, and proudly served in the United States Air Force during the Korean War. He attended Siena College and SUNY Albany, and beginning in the 1950s followed his brother Jack in working for New York Telephone Company, rising from a journeyman lineman to management. When AT&T divested in the 1980s, he fulfilled a lifelong dream of establishing his own business by forming CFM, Inc. with partners Richard Flanagan and Richard McCloughlin. The telecommunications consulting firm had clients throughout the Northeast as well as Europe and Asia. He enjoyed many notable successes, none of which he valued more than the numerous warm friendships he made. Many of his happiest times and most lasting bonds were forged on the golf course, beginning at 8-years-old as a caddy at Albany Municipal Golf Course and extending through decades of friendship and competition on and off the course. His legendary skill was such that a newly matched player, on witnessing his opening drive, once commented, "I see signs of a misspent youth!"—a remark Bill relished. William Henry Cassidy was called "a genius at living"—and he truly was. It is a legacy he leaves for us all. An extraordinary gentleman, lifelong learner, devoted husband, beloved father, and cherished grandfather, Bill Cassidy will be most remembered for his exceptional generosity of spirit, quick wit, and kind heart. In his honor the family asks that donations be made to Capital City Rescue Mission, www.capitalcityrescuemission.org, (518) 462-0459. Relatives friends are invited to visit with Bill’s family Tuesday, July 2, 2019 4:00 PM to 7:00 pm at McVeigh Funeral Home, 208 North Allen Street, Albany, NY 12206. Funeral services Wednesday, July 3, 2019 at 9:15 am at McVeigh Funeral Home, Albany thence to St. Pius X Church, Loudonville at 10:00 am where his Funeral Mass will be celebrated. The Rite of Committal will be held at Gerald BH Solomon Saratoga National Cemetery at 1:30 pm following the Funeral Mass. To leave a message for the family, please visit www.McveighFuneralHome.com

Loudonville-William Henry Cassidy passed away unexpectedly on Sunday, June 30, 2019, much like he entered this world&#8212;surrounded by peace, love, serenity&#8212;and the embrace of a large group of loved ones. He was born on September... View Obituary & Service Information

The family of William H. Cassidy created this Life Tributes page to make it easy to share your memories.

Send flowers to the Cassidy family.