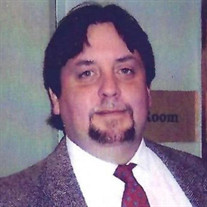 Troy- William Patrick “Bill” Harmon, 58, died peacefully in his sleep at Samaritan Hospital on Sunday, May 17, 2020. Born in Albany, he was the son of the late Thomas Robert Harmon and the late Ellen Fay Harmon. With sunny disposition and razor wit, Bill found humor in all life’s aspects, and created jokes on every subject, endearing us with his sparkling eyes and dimpled smile. We miss him deeply. An Albany High School graduate, Bill studied medical subjects during his occupational career as Lead Ophthalmic Technician in the Samaritan Hospital Operating Room. A legendary local Operating Room Technician, Bill excelled in Orthopedic, General, Plastic, and Ear, Nose & Throat surgeries; having served at St. Mary’s Hospital and the Ophthalmic offices of Dr. Pei Fei Lee, and Dr. Howard Tanenbaum. With attention to detail and perseverance, Bill began his medical service career at Child’s Hospital in Albany, diligently working his way from kitchen worker to Patient Transport Specialist, and ultimately won recognition as an expert Operating Room Technician. His compassionate ability to connect with others and calm them, made him especially suited for his work with surgical patients, who are often anxious and afraid. Bill was an avid outdoorsman who pursued largemouth bass for catch and release, and he took part in freshwater fishing trips throughout the US and Canada. He was skilled with hand tools and liked completing small construction projects at home and camp, where he enjoyed working with small boats. Bill volunteered with several family members at RISE Radio (WMHT), a Capital Region broadcast information service for the blind and print disabled. A creative and talented cook in high school, Bill worked for many years as a senior culinary specialist at the Albany Turf Inn. Bill was also a pizza chef at the Fountain Restaurant in Albany. His early employment in the Albany Pine Hills neighborhood includes gas station attendant at the Madison Mobile as a teen, and Times Union delivery boy from a young age. A loyal NY Giants fan, Bill frequented Albany Training Camp events; and hosted Super Bowl activities for his co-workers. He was an avid reader at home, and loved crosswords, jumbles, and Sudoku. For his honesty, work ethic, kindness, and wisdom, Bill is genuinely missed by scores of co-workers, physicians, patients, neighbors, relatives, friends, and everyone who knew him. As he joins his parents and late brothers Michael Harmon, David Harmon and James Harmon, Bill is survived by his son, Travis Harmon (Cherie), and his siblings, Mary Ellen O'Connell, Thomas Harmon (Laurie), Karen Law, John Harmon (Maureen), Maureen Harmon, Phyllis Blow (Steven); his close cousins, the Rev. George Fleming, and Edward Fleming, and his many nieces and nephews. Please remember Bill with a moment of silent contemplation to recall how he improved the world for so many of us. His Samaritan Hospital friends are planning a reception in Bill’s memory (Details TBD as New York COVID-19 restrictions allow). To leave Bill’s family a message on their guestbook, light a candle, or view other helpful services, please visit McVeighFuneralHome.com.

Troy- William Patrick &#8220;Bill&#8221; Harmon, 58, died peacefully in his sleep at Samaritan Hospital on Sunday, May 17, 2020. Born in Albany, he was the son of the late Thomas Robert Harmon and the late Ellen Fay Harmon. With sunny disposition... View Obituary & Service Information

The family of William "Bill" P. Harmon created this Life Tributes page to make it easy to share your memories.

Send flowers to the Harmon family.