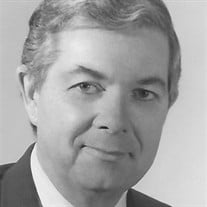 Loudonville-Walter J. Marvin, 85, passed away peacefully on Saturday, February 1, 2020. Walter was born on January 19, 1935 in Hudson, New York to the late Myron O. and Mary R. Marvin. Walter Marvin was a descendent of Matthew Marvin, originally from Great Bentley, England, who was one of the founders of the cities of both Hartford and Norwalk Connecticut in the 1600s. Walter Marvin is predeceased by his sister Mary Ann (Marvin) Russell and brother Roger Marvin. Growing up in Hudson, Walter attended St. Mary’s Academy, graduating in 1952. He earned a bachelor’s degree from Manhattan College in 1956, and in 1958 he earned a master’s degree in Business Administration from Syracuse University. Walter Marvin retired in 1998 as a senior vice president of the Merrill Lynch Private Client Group in Albany. His tenure with Merrill Lynch spanned almost four decades, beginning in 1960. Walter was the past president of the Albany Jaycees and served on a number of community boards, including Big Brothers Big Sisters; the Boy Scouts; the Albany Symphony; Siena College; the American Red Cross; and St. Rose College. He was a pioneer in financial reporting and served as the financial editor for WRGB/Channel 6 and later WTEN/Channel 10 beginning in the early 1970s. He also broadcasted financial reports twice daily on WHRL, 103.1 FM for roughly thirty years. Walter was a jovial friend and colleague as well as a devoted husband, father and grandfather. He made friends wherever he went, whether on the golf course, on the basketball court, or on the sidelines of his grandkids’ athletic contests or performances. He enjoyed spending time over a meal, telling stories and jokes, and delighting small children with magic tricks. After his retirement from Merrill Lynch, Walter and his wife Jean relocated to Naples, Florida, where they lived until 2018, before returning to the Capital District area. He is survived by his wife of 61 years, Jean A. Marvin of Colonie and three children; sons Walter M. Marvin of Delmar and Michael J. Marvin (Kimberly) of New Orleans; and daughter Kelly Cummings (Richard) of Loudonville. Walter is also survived by four grandchildren: Michael W. Marvin (Weatherly); Sam R. Marvin (Charlotte); Richard Cummings IV and Grace Cummings. The family wishes to extend a special thanks to the staff of Eddy Village Green, house #7 for the kind and compassionate care that they gave Walter over the past year. Relatives and friends are invited to visit with Walter’s family Tuesday, February 4, 2020 from 4:00 pm to 7:00 pm at McVeigh Funeral Home, 208 North Allen Street, Albany, NY 12206. Funeral services Wednesday, February 5, 2020 at 9:15 am at McVeigh Funeral Home, Albany thence to St. Pius X Church, Loudonville, NY at 10:00 am where his Funeral Mass will be celebrated. The Rite of Committal will follow at Cedar Park Cemetery, Hudson, NY immediately following the Funeral Mass. To leave a message for the family, light a virtual candle, obtain directions or view other helpful services please visit www.McveighFuneralHome.com Those wishing to remember Walter in a special way may send a contribution to St. Pius X Church, 23 Crumitie Road, Loudonville, NY 12211.

The family of Walter J. Marvin created this Life Tributes page to make it easy to share your memories.

Send flowers to the Marvin family.