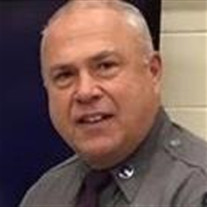 Albany-Trooper Michael J. Anson, 56, passed away on January 2nd, 2018, from an illness stemming from his assignment at the World Trade Center site following the terrorist attack on September 11, 2001. Mike was sworn into service with the New York State Police September 22, 1986 and served with them as a trooper for over 31 years. Mike served his entire career in Troop G. Following the events of September 11th, Mike was assigned to New York City to aid in the search and recovery efforts. He was most recently stationed at SP New Scotland. Mike was previously assigned to SP East Greenbush, SP Brunswick, and SP Schodack, where he served as a school resource officer from 2003 -2010 in the Averill Park and Brunswick School Districts. In addition, Mike served as an Academy Training Officer at the NYSP Basic School for multiple classes from 2012-2017. Born in Albany, Mike was the son of the late Gerald G. Anson and Frances M. Frederick Anson. Michael graduated from Colonie High School in 1980, and then Hudson Valley Community College, before he went on to the State Police academy. Michael was a beloved son, husband, father, brother, friend and Trooper. He dedicated his life to helping others, both on the job, and off, and could always be counted on to help out a friend or neighbor in need. He truly believed that if you do what you know in your heart to be right, everything else will fall into place. He lived, and raised his children, by this motto. Michael had many hobbies and interests, and truly lived life to its fullest. For many years, he played baseball, and later softball, and enjoyed coaching his daughter’s softball teams where he was able to teach his passion and knowledge of the game. He was an avid fan of classic country music, as well as rock, particularly The Ramones. He also enjoyed bowling, golfing, hunting and fishing with his sons, spending time camping, and more recently on his pontoon boat, and most of all spending time with his family. Mike's love and dedication to being a Trooper was only surpassed by that which he gave to his family, specifically his "core four" as he liked to call them. He was the high school sweetheart, and loving husband for almost 30 years of Suzanne M. Mabeus Anson; revered father of Mikala E. Anson, Conor G. Anson, and Marc R. Anson; brother of Gerald G. Anson (Carol), Joseph L. Anson (Jody), George E. Anson (Pamela) and the late Roy R. Anson; brother-in-law of Michele and Jerry Daby and Karl and Martha Mabeus; son-in-law of the late Richard and Claire Cote Mabeus; nephew of Jeanne Cote; life-long best friend of Maureen Cole; uncle of Kacie, Adam, Lindsey, Kimberly, Shannon, Derek, Melissa, Taylor, Lauren, Olivia, Isabelle and Andrew; Michael is survived by his two beloved dogs, Samantha and Bubba, and many friends, cousins and law enforcement colleagues. The family would like to extend a special thank you to the New York State Police, and Town of Colonie Police Department for their unending support to them in this most devastating time. Relatives, friends, and fellow Law Enforcement Colleagues are invited to visit with Michael’s family Monday, January 8, 2018 4:00 to 8:00 pm in Siena College’s Alumni Recreation Center (ARC). Funeral services Tuesday, January 9, 2018 at 11:00 am in Siena College’s ARC where his Funeral Mass will be celebrated. The Rite of Committal will be held in Memory Gardens Cemetery, immediately following the Mass. Those wishing to remember Michael J. Anson and pay respects to his family in a special way may send a contribution to either the American Lung Association, 418 Broadway, 2 nd Floor, Albany, NY 12207, or NYS Troopers PBA Signal 30 Fund 120 State St., Suite 2 Albany, NY 12207. To leave a message for the family, light a candle, view Michael’s Life Tribute or see other helpful services please visit www.McveighFuneralHome.com

Albany-Trooper Michael J. Anson, 56, passed away on January 2nd, 2018, from an illness stemming from his assignment at the World Trade Center site following the terrorist attack on September 11, 2001. Mike was sworn into service with the New... View Obituary & Service Information

The family of Trooper Michael J. Anson created this Life Tributes page to make it easy to share your memories.

Send flowers to the Anson family.