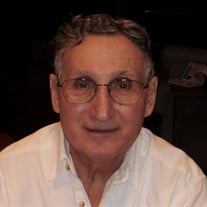 Albany-Thomas F. LoPresti, 95, died peacefully December 6, 2021 at the Hospice Inn at St. Peter’s Hospital. A lifelong Capital Region resident, Tommy grew up in the South End of Albany on Grand Street where his parents, Antonio and Angeline (Chillemi) LoPresti, owned LoPresti’s Bakery. He was a graduate of Christian Brothers Academy and a veteran of the United States Navy. Until the bakery closed in the late 1950s, Tommy delivered bread to customers throughout Albany and beyond. He later worked for the U.S Postal Service for nearly 30 years. A former Arthur Murray instructor, Tommy was an excellent dancer and loved big band music, especially Artie Shaw. As a young man, he played the clarinet in LoPresti’s Concert Band on feast days at local churches; throughout his life, he could often be heard whistling or humming zippy tunes. He enjoyed golf, horseracing and outings with his nephews Tom and Louie. His memory was like no other, a repository of zip codes and the birthdays of every major (and minor) actor of the 20th century. Tommy loved movies, from “Red River” to “Cover Girl” to “Casablanca;” his impression of Humphrey Bogart will forever be a family favorite. There will never again be anyone like him, and he will be dearly missed. He is predeceased by his parents; his brother Anthony “Babe” LoPresti; and his sister and brother-in-law, Mary and Louie Piazza. He is survived by his sister Rose (Brian) Leyden of Malta; his sister-in-law Donna LoPresti of Clifton Park; and many nieces, nephews, great-nieces and great-nephews who loved him very much. The family is grateful to the Hospice Inn for its compassionate care during Tommy’s final days. Relatives and friends are invited to visit with his family Saturday, December 11, 2021 from 9 a.m. to 10 a.m. at Christ Our Light Catholic Church in Loudonville, N.Y. A Funeral Mass will follow at 10 a.m. Masks are required. The burial will be at Calvary Cemetery in Glenmont immediately following mass. In lieu of flowers, memorial donations may be made to The Community Hospice Foundation, 310 S. Manning Blvd., Albany, NY, 12208.

The family of Thomas F. LoPresti created this Life Tributes page to make it easy to share your memories.

Send flowers to the LoPresti family.