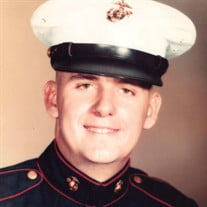 Altamont, NY-Thomas (Tom) B. Decker, 76, of Altmont passed away May 31, 2020 with his loving wife Therea by his side. Tom was born on December 1, 1943 in Albany, New York to the late Joseph L. Decker and Anne (Ellis) Decker. He graduated from Vincentian Institute in 1962 and enlisted in the United States Marine Corps in 1964. From 1965 to 1966, he served in the Vietnam War, ascending to the rank of sergeant before leaving the military in 1967. Tom went on to spend over 30 years at Spencer Press in Wells, Maine, acting as the company’s Customer Service Manager. Tom is the treasured husband of Theresa (Fuina) Decker, whom he married in May of 1966; beloved father of Byrne Decker; and brother of JoAnn Choppa, Ellen Murray, Joseph Decker, and James Decker. Tom’s pride and joy were his four grandchildren — Megan, Benjamin, John, and Caroline — whose adoration brought him great happiness. He is also survived by two sisters-in-law, one daughter-in-law, many nieces and nephews, as well as close friends Gordon Ryan, Rich Trombley, and Rich Becker. Tom will be missed for his loyalty, kindness, work-ethic, and dependability. He was a true gentleman, and an honorable husband, father, and grandfather. He was also a lifelong sports fan, and when he wasn’t biking, swimming, or golfing with friends, he could often be found on the sidelines of sporting events at Siena College and UAlbany. He shared this love of sports with his son, Byrne, and was his biggest fan at every single baseball game, basketball game, and cross country race. Tom also proudly supported his four grandchildren and was always there to encourage them in their pursuits. He formed meaningful friendships with many people, who will miss him for his selflessness and eagerness to lend a helping hand. Due to social distancing mandates caused by the COVID-19 pandemic, a celebration of Tom’s life will be held at a later date to be announced by his family. Tom spent his final days in hospice care at St. Peter’s Hospital in Albany. The doctors and nurses showed him and his family compassion during a difficult time, ensuring his comfort as he reached the end of his journey. Memorial donations may be made in Tom’s name to the St. Peter’s Community Hospice Foundation(http://www.givetocommunityhospice.org/donate/). Condolences may be sent to [email protected] and [email protected]

Altamont, NY-Thomas (Tom) B. Decker, 76, of Altmont passed away May 31, 2020 with his loving wife Therea by his side. Tom was born on December 1, 1943 in Albany, New York to the late Joseph L. Decker and Anne (Ellis) Decker. He graduated from... View Obituary & Service Information

The family of Thomas B. Decker created this Life Tributes page to make it easy to share your memories.

Send flowers to the Decker family.