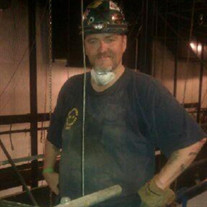 Sean Michael Woods passed away on March 23, 2021 after a long and courageous battle with diabetes and Ground Zero related illnesses. Born on November 26, 1963, the son of Ann (nee Carroll) of Rosmeen, Kells Co. Meath Ireland and Robert Woods of Königsberg, East Prussia. A first generation American, Sean was extremely proud of his Irish and East Prussian heritage but anyone that knew Sean could attest that he was a proud American, and even more importantly a true New Yorker, born in Manhattan and raised in The Bronx. Sean is survived by his two young sons, Robert (Bobby) and Sean (Seanie) Woods, whom he adored, former wife Kathleen McDermott, sister Claire Corroon, very special first cousins Lizzie Carroll, Susi Bannister, and Andy Carroll of England (via Meath), and many cousins in Ireland & England. Sean was the beloved friend of his oldest and best friends, James Barrett and Bernard Morgan and will be deeply loved forever by his girlfriend of ten years, Sheila Savage. Sean also leaves many close friends from the Woodlawn neighbourhood, special friends from his campsite and his fellow brothers from Local #197. Sean was educated at Holy Spirit and St. Nicholas of Tolentine. Sean loved anything to do with NYC, but he was also an avid outdoorsman and cherished the many years he spent at his camp with his children in the Irish Alps, East Durham, NY. He loved camping, campfires, darts, birdwatching, travel, swimming & music, especially heavy metal, and Irish songs. He often remembered his childhood days, summers back home in Ireland, playing hockey, being a member of the Sea Cadets and making the Varsity Swim Team at Tolentine. He was an avid reader, devouring books and had an incredible ability to retain everything he read. He could recite history and he had a great flair for languages, speaking a smattering of many & fluent German. But perhaps Sean’s greatest achievement were the 20 plus years he spent with his Local, Union #197 as a NYC Ironworker. Sean was filled with pride to be a part of the oldest Local in the Country, “formed on The Brooklyn Bridge”, he would say. Sean will be remembered as a 9/11 hero, working in Jersey City when he saw the first plane hit, he immediately took a ferry to Manhattan as a first responder and remained at Ground Zero for 11 months, making the NYC newspapers twice and receiving a part in a NYC 9/11 Tribute Film entitled, “Everyday Heroes”. Sean has left an incredible legacy as a NYC Iron Worker for his boys. Sean was a larger than life man, in both stature and personality, a hard charger, a one of a kind, he lived life on his own terms. Sean Woods loved a good time and a few laughs; he had a zest for living and travelled the globe. If you had a friend in Sean, he was the most loyal person one could ever know. Taken from us too soon at the young age of 57, Sean will be forever missed. ' So fill to me the parting glass. And drink a health whate'er befalls. Then gently rise and softly call. Good night and joy be to you all.' Slàinte Sean, we love you. Sean’s funeral mass will be celebrated on April 24, 2021 at 10:45 am at St. Barnabus R.C. Church 409 East 241 Street Bronx, NY 10470. A fitting date for Sean, the anniversary of the Easter Uprising, April 24, 1916. Interment at Our Lady of Angels Cemetery in Albany, NY on Tuesday, March 30 at 12:30 pm

The family of Sean M. Woods created this Life Tributes page to make it easy to share your memories.

Send flowers to the Woods family.