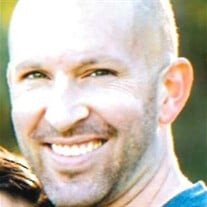 Voorheesville – Ryan James Murray, 40, passed away after a courageous 19-month fight with Multiple Myeloma on May 16, 2019 with his wife Rachel by his side. Rachel and Ryan met 15 years ago and have been inseparable ever since. They continued to teach each other life lessons every day together that will always be cherished and passed on to their boys. He worked for his family business as Vice President of The Murray Group since 2003. He was very dedicated to his work and always strived for the highest level of success. His greatest joy was spending time with his wife and children. He loved being outdoors especially during his favorite season of fall. He enjoyed vacationing in Naples, Florida every year with Rachel, Nick and Luke and teaching the boys his favorite sport of golf. One of the most important lessons he felt this awful battle with cancer taught him was the importance of spending more time with his family even if it meant just taking a walk together. The strength Ryan demonstrated during this illness will never be forgotten and has been an inspiration to so many. Ryan was a 1997 graduate of Christian Brothers Academy before going on to graduate from Union College in 2001, and the MBA program from Union College in 2003. He was a guard on the basketball team from 1999-2001 while at Union. Ryan was the beloved husband of Rachel Chakmakas Murray and father of five-year-old twin boys, Nicholas and Luke Murray. He was the son of James Murray (Debbie); brother of Lauren Murray (Ryan Hanley) and Bridget Narcisco (Eric); brother in law of Marissa Michaels (Alexander), Andrew Chakmakas (Kara), Ryan Wilkins, and Brendon Wilkins; son in law of George Chakmakas and Joan Wilkins (Lance); uncle of Remi and Finn Chakmakas, Duke and Colton Hanley, Vivian and A.J. Narcisco; nephew of Susan Neary, Stephany Pierce (Ed), Rita Dirrane, Jeanne Hagerty (Jack), and Irene Murray. He is also survived by several cousins and second cousins. Ryan was predeceased by his mother Nancy Murray. An account has been set up for the ongoing care of Rachel and Ryan's beloved sons at Bank of America. Donations may be made out to Rachel Murray indicating on memo line for benefit of Nicholas and Luke Murray and mailed to McVeigh Funeral Home, 208 North Allen Street, Albany, NY 12206 or brought to any Bank of America location. Relatives and friends are invited to visit with Ryan’s family on Tuesday, May 21, 2019 from 4:00 to 7:00 pm in the McVeigh Funeral Home, 208 North Allen Street, Albany. Ryan’s Funeral Mass will be celebrated on Wednesday, May 22, 2019 at 10:00 am at St. Thomas the Apostle Church, 35 Adams Place, Delmar. The Rite of Interment will immediately follow the Mass at Prospect Hill Cemetery, Guilderland. To leave Ryan’s family a message on their guestbook, light a candle, or view directions, please visit www.mcveighfuneralhome.com

Voorheesville &#8211; Ryan James Murray, 40, passed away after a courageous 19-month fight with Multiple Myeloma on May 16, 2019 with his wife Rachel by his side. Rachel and Ryan met 15 years ago and have been inseparable ever since. They continued... View Obituary & Service Information

The family of Ryan James Murray created this Life Tributes page to make it easy to share your memories.

Voorheesville – Ryan James Murray, 40, passed away after a courageous...

Send flowers to the Murray family.