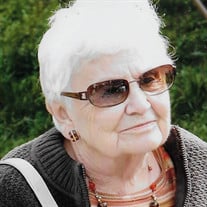 Albany-Ruth Deyo Munsell, 94, passed away peacefully on Wednesday, May 9, 2018 at St. Peter’s Hospital in Albany, NY. Born in Kingston, NY she was the only child of Raymond Stebbins Deyo and Alice Cecelia Donnelly. She was the cherished wife of Eugene W. Munsell, by whom she is survived, for 68 years. She is survived by her children, Stephen C. Munsell (Lori Gianquitto) and Gerald A. Munsell. She was predeceased by her son, John Francis Munsell and her daughter, Patricia Jean Munsell Koethen (John Koethen). She is also survived by her beloved grandchildren, Allison Munsell Napierski (Robert Napierski), Amelia Koethen, Nora Koethen, Paul Munsell, Nicholas Munsell and great granddaughter, Rae Josephine Napierski. Ruth was a graduate of St. Ursula’s Academy and Spencer Business School in Kingston, NY. She worked for the State University of New York’s University-wide Programs in the Arts and, prior to that for the NYS Legislative Index. Ruth was an avid reader known for her quick wit and excellent memory. After she retired, she volunteered for the capital district American Diabetic Association. She received their Volunteer of the Year Award in 1992. She was a parishioner at Holy Family Parish in Albany and also a member of “The Sewing Club,” a group of neighborhood women who started meeting one evening a week in the 1950’s and became lifelong friends. Relatives and friends are invited to visit with Ruth’s family Monday, May 14, 2018 from 4:00 to 7:00 pm in McVeigh Funeral Home, 208 North Allen Street, Albany, NY. Funeral services and Interment will be held privately. Those wishing to remember Ruth in a Special way may send a contribution to the charity of your choice. To leave a message for the family, please visit www.McveighFuneralHome.com

Albany-Ruth Deyo Munsell, 94, passed away peacefully on Wednesday, May 9, 2018 at St. Peter&#8217;s Hospital in Albany, NY. Born in Kingston, NY she was the only child of Raymond Stebbins Deyo and Alice Cecelia Donnelly. She was the cherished... View Obituary & Service Information

The family of Ruth K. Munsell created this Life Tributes page to make it easy to share your memories.

Send flowers to the Munsell family.