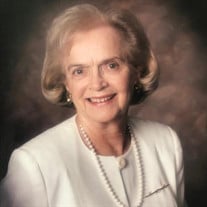 Roberta Donehue Arend Ryan, life-long Albany, NY resident, died peacefully in her sleep on April 23, 2020 at the Mercy Ridge retirement community in Timonium, Maryland. She was 94 years old. Mrs. Ryan was pre-deceased by her parents, Dr. Edward Donehue, DDS, and Mary Cecilia Esmond Donehue; her brothers, Reverend Ambrose Donehue, OFM, and Paul Donehue; first husband Captain Peter Gerald Arend, U.S. Army, who was killed in action during the Korean Conflict in 1951; and second husband, Thomas A. Ryan, a retired public school principal from Troy, NY, who passed away five months after their wedding in 1983. Although her marriage to Mr. Ryan was short, Mrs. Ryan remained very close to her inlaws throughout the years. Mrs. Ryan is survived by son Peter Gerald Arend, Jr. of Baltimore, MD and daughter Victoria Arend Johnson of Hunt Valley, MD, plus many nephews, nieces, grand-cousins and step-relatives. Mrs. Ryan graduated from the Kenwood Academy of the Sacred Heart in Albany, NY in 1943 and from the College of St. Elizabeth in Convent Station, NJ in 1947. She later received a Master of Arts in Teaching at Siena College in Loudonville, NY. She taught remedial reading at the William S. Hackett Middle School in Albany for almost 28 years until her retirement in 1991. Mrs. Ryan was a world traveler, where she traveled to Japan, Russia, Brazil and most of Europe. She made two trips to Oberammergau for the Passion Plays, and made numerous trips to the Shrine of St. Ann- deBeaupre outside of Quebec City. During her retirement years, she was active in a number of educational, religious and charitable organizations. She was a Member of the Board of the City Club of Albany, the Doane Stuart School, and the Teresian House. A devout Catholic and life-long daily communicant, Mrs. Ryan served as lector and eucharist minister at St. Joan of Arc Church in Menands, and St. Francis Chapel in Colonie, NY, where her brother, a Franciscan priest, was stationed for nine years. She also brought Holy Communion on a weekly basis to inpatients at the Albany Medical Center. In addition she served as a member of the Order of Malta, and made six separate trips to Lourdes, France where she sponsored and accompanied pilgrims seeking a cure of their serious illnesses. At age 89, Mrs. Ryan relocated from Albany, NY to Mercy Ridge Community, an independent retirement home, in order to be close to her children. During the past 6 years, she devoted herself to making friends among the residents and staff of Mercy Ridge, and attending daily Mass whenever possible. Mrs. Ryan will be remembered most for her compassion and love for other people. She was very outgoing and friendly with everyone she met, no matter their ages. She will be enormously missed, particularly by her devoted son and daughter, Peter and Vicki. Burial will be private in Albany, NY due to the current government restrictions. A Memorial Service will be planned in Albany at a later date. Donations can be made in Mrs. Ryan’s name to the Franciscan Fathers of Holy Name Province, 144 West 32nd Street, New York, NY 10001-3202 or Teresian House Center for the Elderly, 200 Washington Ave. Ext., Albany, NY 12203. To leave a message for the family, please visit www.McveighFuneralHome.com

The family of Roberta A. Ryan created this Life Tributes page to make it easy to share your memories.

Send flowers to the Ryan family.