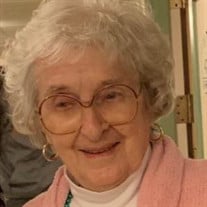 Albany - Roberta O. Fox, 92, peacefully passed away on February 7, 2019 and joined her beloved parents once again. She was the daughter of the late Robert J. & Vera C. O’Brien of Colonie, N.Y. Roberta graduated from Mont Pleasant High School and Albany Business College. She a was a legal secretary in Albany and had worked for over 40 years for the law firms of Feeney & Ford, Miner, Feeney and Ford, and Feeney, Centi and Mackey. She also sold real estate for the Bob Howard Group and continued to do that after she retired from being a secretary. During her years of owning older homes and selling houses she was always very optimistic and was famous for her phrase “ It will look great:, Just slap a coat of paint on it”. During the years while her two children were young she was very active in the Cub Scouts having served as a Den mother and was also very active in the Girl Scouts of America. She never missed a game or an event that her children were in. She was an icon on Clinton Ave. and loved both her house, her neighborhood and her neighbors. She enjoyed vacationing in Wells Beach, Maine and tracing her family’s lineage back to The Mayflower and The Daughters of the American Revolution. She was also very proud and supportive of her law enforcement family and would listen to the police scanner for hours to see if she could hear Pat or Brian on the radio and was always there to lend a hand to the officers who worked in the Arbor Hill area where she lived. She is survived by her son Patrick (Judith) Fox of Colonie and her daughter Michele (Brian) Tario of East Greenbush. She is proud of the accomplishments of her (7) Grandchildren, Jennifer (Gary) Van Wormer, Jamie Tario, Christina Fox, Robert (Ally) Tario, Alisha (James) Nowell, Meaghan (Kevin) Strob, and Ryan Fox, and (5) Great-Grandchildren, Jonathan, Matthew & Brandon Van Wormer and Addison & Rylan Tario. She was preceded in death by her infant grandson Robert Charles Fox. Funeral services will be held privately. Those wishing to honor Roberta may make a donation to Blue Friday of New York, PO Box 38235, Albany, New York 12203 which honors Police Officers who are killed in the Line of Duty or to The Mayflower Society of which she was a proud member.

The family of Roberta O. Fox created this Life Tributes page to make it easy to share your memories.

Send flowers to the Fox family.