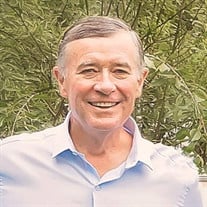 Latham-Robert Peter Klein passed away on Thursday, January 3, 2019 at the age of 71 after a courageous battle with cancer. Bob was born January 12, 1947 in Newburgh, NY to Clarence and Helene Klein. He is survived by his wife of 48 years, Maureen (Miller) Klein, who he married on August 22, 1970 in Albany. He is also survived by his three children, Gregory Klein, Michael Klein, and Alison (Klein) Ritchie, as well as his son-in-law Trevor Ritchie and two granddaughters, Schuyler and Sophia Ritchie. He was older brother to four sisters, Mary Pat (Martin) Sheffield, Joan (Donald) Perry, Lorraine Howe, and Kathy (Bob) Ponesse. He was a beloved brother-in-law, uncle to 20 nieces and nephews, and mentor to countless others. Bob was a graduate of St. Patrick’s High School in Newburg in 1964, and of Siena College in Albany in 1968. He proudly served his country in the US Army from 1969 to 1974 and earned the title of Lieutenant. Bob’s devotion to his Siena College classmates was the glue that has held the group together and he always stepped up to organize outings. His degree in Accounting led him to become a Certified Public Accountant and he held various positions in the area throughout his career. He also spent time as Executive Director of The Family Rosary where he became acquainted with Father Patrick Peyton who would become a guiding light in Bob’s faithful life. Bob was an active individual who enjoyed running (in his younger years), swimming, skiing, kayaking, and golf. He was always up for a lawn game be it croquet, ladder ball, or bocce, and had recently become quite adept at Catchphrase with his granddaughters. Bob was a fixture at his children’s sporting events throughout their lives, and again for his granddaughters, attending soccer games and regattas up until the end. His cheering will be greatly missed. Bob loved to travel and always had a family vacation in the works to places like The Adirondacks, Myrtle Beach, Florida, California, Wyoming, and countless ski vacations to Vermont, Utah, and Colorado. Maureen and Bob famously brought their three children on their 25th Anniversary vacation to Ireland. Most recently, the couple toured Eastern Europe, Alaska, and were blessed with a final, healing, trip to Lourdes, France. Bob led a life centered around his family and his faith. He was a beloved husband, father, grandfather, brother, uncle, and friend. He was a generous philanthropist whose dedication has benefited countless people. Bob’s subtle sense of humor, respect for all life, and ability to find perspective in the toughest of times will always be missed. He sought and celebrated the best in people, always putting others before himself. All who knew him are better for it, and his example will live on for eternity in all those he touched. Relatives and friends are invited to visit with Bob’s family Monday, January 7, 2019 4:00 pm to 7:00 pm at St. Pius X Church, Loudonville, NY (Please enter through the Chapel Entrance of possible). Funeral services Tuesday, January 8, 2019 at 10:00 am at St. Pius X Church, Loudonville where his Funeral Mass will be celebrated. Those wishing to remember Bob in a special way contributions may be made to Community Maternity Services or St. Pius X Capital Campaign. To leave a message for the family, light a virtual candle, obtain directions or view other helpful services please visit www.McveighFuneralHome.com

Latham-Robert Peter Klein passed away on Thursday, January 3, 2019 at the age of 71 after a courageous battle with cancer. Bob was born January 12, 1947 in Newburgh, NY to Clarence and Helene Klein. He is survived by his wife of 48 years, Maureen... View Obituary & Service Information

The family of Robert Peter Klein created this Life Tributes page to make it easy to share your memories.

Send flowers to the Klein family.