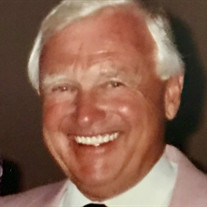 Castleton-Robert “Bob” Lincoln Smith passed peacefully on July 19, 2018 at his home in Castleton, NY surrounded by his family. Born in Albany on September 22, 1929, he was the son of the late Joseph H.B. Smith and Myrtle Smith (Zeh), and brother of the late Richard J. Smith of Schodack. He graduated from Columbia High School in 1948 and attended SUNY Cobleskill before serving in the Army during the Korean War. In 1950, Bob founded R.L. Smith Sales, Inc., a trusted automobile dealership that has been family owned and operated for almost 70 years, serving generations of families from the Capital District. Bob was the beloved husband of the late Trudy J. Smith (Querques), who preceeded him in death 6 days earlier. Bob and Trudy married in 1958 and they were lifelong residents of upstate New York, spending most summers on Lake George and enjoying many fine trips to warmer climates with family and friends. They were members of Wolferts Roost Country Club since 1962, where Bob enjoyed golf and the company of other friends and members. He was also involved with the Kiwanis Club in East Greenbush and had a passion for boating and animals. His greatest accomplishment and act of love was the unselfish and devoted care that he provided to Trudy over the past 5 years. He is survived by his two sons Robert J. Smith (Margaret M.) of Greensboro, GA and Gregory S. Smith of Catskill, three beautiful grandchildren, Michael J. Smith of Ponte Vedra Beach, FL, Ashley E. Smith of Austin, TX, and Kristen M. Smith of Jacksonville, FL and several cousins, nieces, nephews and his favorite dog, Lucy. He is also survived by Trudy’s family – sisters-in-law Janet P. Leach (J. Ronald) of Loudonville and St. Pete Beach, FL, MaryLou Paradise (John W.) of Guilderland and brother-in-law John J. Querques (Mary P.) of Clifton Park. Relatives and friends are invited to visit with Bob’s family on Monday, July 23, 2018, from 4 to 7 p.m. in the McVeigh Funeral Home, 208 North Allen St., Albany, NY. Funeral Services will be held Tuesday, July 24, 2018 at 11:30 am in McVeigh Funeral Home, Albany. Interment will be held in Albany Rural Cemetery, Menands immediately following the Service. In lieu of flowers, contributions in Bob's memory may be made to Lake George Association P.O. Box 408 Lake George, NY 12845. To leave a message for the family, light a candle, view Bob's Life Tribute, obtain directions or view other helpful services please visit McveighFuneralHome.com.

Castleton-Robert &#8220;Bob&#8221; Lincoln Smith passed peacefully on July 19, 2018 at his home in Castleton, NY surrounded by his family. Born in Albany on September 22, 1929, he was the son of the late Joseph H.B. Smith and Myrtle Smith... View Obituary & Service Information

The family of Robert "Bob" Lincoln Smith created this Life Tributes page to make it easy to share your memories.

Send flowers to the Smith family.