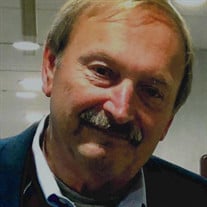 Loudonville-Robert John Fuller died peacefully at his home with his faithful family by his side after complications from a six-year battle with stage four pancreatic cancer. He was born on April 25 anno Domini 1949 in Rensselear, NY to Dorothy Tucker Fuller and John Fuller. Bob was a thirty-four-year resident of Loudonville moving to Halfmoon in 2017. He was also a resident of Yarmouthport, Massachusetts. Bob is survived by his devoted wife of forty-six years, Susan Carol Peters Fuller. His children, David Robert (Jessica) of Kingston, MA. and Lauren Michelle Frey (Frederick) of Dayton, MD. were his greatest accomplishment. He is survived by four grandchildren Annabelle Grace and Jackson David Fuller and Frederick Liam and Kinley Marie Frey. They were his pride and joy and the apple of his eye. Bob also leaves behind a sister, Lorraine Tidd (Richard), and brothers Bruce (Missy) and Gary (Ann) Fuller. He is also survived by his mother-in-law (Marion Peters) and brothers-in-law William (Pat) and Robert (Diane) Peters. Bob is also survived by his nieces and nephews. Life-long friends who were always there for him include Brian and Janet Stevens, Ronnie and Pam Rich, and Thomas and Karen Karl. Bob graduated from Columbia High School; received his undergraduate degree from Siena College and his MBA from the College of St. Rose. For many years, he managed Albany Public and Shop-Rite supermarkets. He left the supermarket business to pursue a career as a regional manager with Valvoline Instant Oil Change which he ran for twenty-five years. In his retirement, he enjoyed driving a school bus for the North Colonie School District. Bob was active in the LaSalle Parent Club and volunteered at Westland Hills Little League. For four years, Bob and Sue enjoyed watching their daughter play field hockey at Hobart and William Smith Colleges. He made sure they never missed a game and was their biggest cheerleader. Bob was also an avid New York Yankee and New York Giants fan. Since 1984, Bob was an usher on Sunday mornings at St. Pius X Church. Bob and Sue spent many summers with their children and family vacationing on their beloved Cape Cod. In 2013, they accomplished their dream and bought a home in Yarmouthport, MA. They especially enjoyed spending time at Grays Beach and Dennis Pond. Bob believed in hard work, self-reliance, dedication, a strong family life, love of God, and love of country which he instilled in his children. Throughout his valiant six-year battle, he never gave up and always kept a positive outlook on life. We will be eternally grateful to Johns Hopkins Hospital and Dr. Charles Weismann of NYOH. Without their collaboration, Bob would not have had the last six years of his life. Also, many thanks to Dr. Adriana Lisinschi, MD, PHD, and Alicia Ray, RN and the staff at NYOH for the wonderful, personal care they gave Bob. Finally, to our neighbors in Linden Woods who always took the time to visit with Bob. They always knew on a good day; he'd be out catching the sunshine. Relatives and friends are invited to visit with Bob’s family Friday, January 29, 2021 3:00 pm to 6:00 pm at the McVeigh Funeral Home, 208 North Allen Street, Albany, NY 12206. Please only enter the funeral home from the rear parking lot doorway; masks and social distancing are required; and 35 visitors at a time will be allowed in the funeral home. Funeral services Saturday, January 30, 2021 at 11:00 am at. St. Pius X Church, Loudonville, NY where his Funeral Mass will be celebrated. Please only enter the church from the front doorway; masks and social distancing are required; church ambassadors will be available to help with seating and questions; and please attempt to arrive before 10:45 am. The Rite of Committal will be held at Our Lady of Angels Cemetery immediately following the Funeral Mass. To leave a message for the family please visit www.McveighFuneralHome.com In lieu of flowers, the family would like contributions in memory of Bob sent to Ralph H. Hruban, MD, Johns Hopkins Hospital, 600 N. Wolfe Street, Carnegie 417, Baltimore, Maryland 21287, in support of research for pancreatic cancer. For further information please visit: http://pathology.jhu.edu/pancreas/support.php#flowers

Loudonville-Robert John Fuller died peacefully at his home with his faithful family by his side after complications from a six-year battle with stage four pancreatic cancer. He was born on April 25 anno Domini 1949 in Rensselear, NY to Dorothy... View Obituary & Service Information

The family of Robert "Bob" John Fuller created this Life Tributes page to make it easy to share your memories.

Loudonville-Robert John Fuller died peacefully at his home with...

Send flowers to the Fuller family.