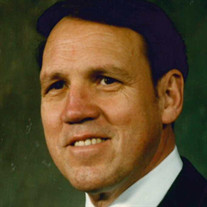 Loudonville-Richard P. Terlingen, 88, entered Eternal Life Friday, October 13, 2017 with his daughter by his side. Born in New York City in 1928, he was the son of Leo and Marguerite Drescher Terlingen. Dick spent his youth in Astoria, Queens and in 1941 moved to Walden, NY where his family opened Leo’s Restaurant. He remained in Walden through High School, where he participated in many sports. Dick graduated from Siena College in 1953, where he played Varsity Basketball. He was a US Army Korean War Veteran. Dick joined IBM, Kingston, NY in 1955 and retired as an International Procurement Manager. He traveled the globe and thoroughly enjoyed his work. He retired in 1992 and in 1998 he and Marilyn moved to Loudonville to be close to their daughter and family. He spent much of his time with family and friends and his passion included golf and Siena Basketball. In 1954 Dick married the love of his life, Marilyn McDermott, who passed away in 2006. He was the dear father of Richard P. Terlingen Jr (Jami) of Denver CO, Maura Courcelle (Edward) of Albany, and the late Dwight D. Terlingen; dear Pop Pop of Elizabeth Courcelle, Brian Courcelle, and Chloe Terlingen; father-in-law of Donna Terlingen (Charlotte, NC); many nieces and nephews survive. Relatives and friends are invited to visit with Richard’s family Sunday, October 15, 2017 3:00 pm to 6:00 pm in McVeigh Funeral Home, 208 North Allen Street, Albany, NY 12206. Funeral services Monday, October 16, 2017 at 8:00 am in McVeigh Funeral Home, Albany thence to Siena College Chapel at 9:00 am where his Funeral Mass will be celebrated. The Rite of committal will be held in Calvary Cemetery, Glenmont immediately following the Mass. Those wishing to remember Dick in a special way may send a contribution to Peter Young Charitable Foundation, 40 Eagle Street, Albany, NY 12207. To leave a message for the family, light a candle, obtain directions or view other helpful services please visit www.McveighFuneralHome.com

Loudonville-Richard P. Terlingen, 88, entered Eternal Life Friday, October 13, 2017 with his daughter by his side. Born in New York City in 1928, he was the son of Leo and Marguerite Drescher Terlingen. Dick spent his youth in Astoria, Queens... View Obituary & Service Information

The family of Richard P. Terlingen created this Life Tributes page to make it easy to share your memories.

Send flowers to the Terlingen family.