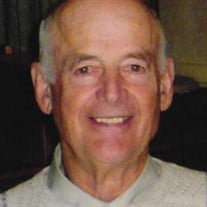 Albany-Redmond Newell, “Red”, 92 passed away peacefully at his home, surrounded by his loving family on April 22,2020. Born in Curracuggeen, Headford, County Galway, Ireland, he was the son of the late Thomas and Nora (Brett) Newell, and beloved husband of 65 years to the late Mary T. (Hanlon) Newell. Beloved father of Maira Newell, Thomas Newell, Patricia Newell, Teresa Newell and the late Barbara Newell; treasured grandfather of Molly Newell and Sean Newell; survived by many nieces, nephews, grandnieces, and grandnephews. Red was one of nine siblings: Fr. Hubert Newell (deceased); Fr. Martin Newell; Jack Newell (deceased); Thomas Newell (deceased); Sr. Kathleen Newell; Sr. Naula Newell (deceased); Teresa Burke (deceased) and Mary Finnegan (deceased). Red, with his sister Teresa, came to the United States by way of a seven day boat ride on the M.V. “Britannic”. They arrived in New York City on June 11, 1949. Red was 21 years of age. He received his Certificate of Naturalization on June 15, 1954. He served in the Army during the Korean War and was stationed in Germany working in the Anti-Aircraft Artillery Unit. Some of Red’s first jobs in the U.S. were working at the Port of Albany, Wm’s Press, and the A+P. He joined the Plumbers and Steamfitters Local No.7 where he became a plumber, officer, and teacher. He was a member of Local 7 for 67 years. Red was well-respected as a hard-working, honest Irishman. Anyone who knew him only had words of praise. His work ethic was surpassed by none. Red had a great love for sports and was known as one of the best soccer goalies around. He played on several championship leagues (Albany Athletic Club). When he retired to took up golf, which gave him great joy. He played on several leagues (Dubbers and Old School). Red also coached boys little league at Westland Hills. He shared his love for sports with his children and neighborhood kids. He even built a basketball court in his backyard. Red enjoyed teaching kids how to hit a baseball, shoot hoops, and play soccer. It was not unusual for the backyard to be full of kids ready to play whatever sport/activity Red had instore for them. Red volunteered for 25 years at the Albany VA Hospital where he drove vets to and from appointments. He also volunteered at the Albany Food Bank and Tunnels to Towers Foundation. As a parishioner of Blessed Sacrament Church, Red was always ready to construct booths for the annual bazzar. He also volunteered at the Church’s food pantry. Red was a member of the Holy Names Society and American Legion Joseph E. Zaloga Post 1520. He enjoyed Friday morning gatherings with the TGIV group (Thank God It’s Veterans) at the Gateway Diner. With this group he volunteered to mend fences at Little Brook Rescue Horse Farm in Old Chatham. Red was known as a man of few words with a compassionate heart. Anyone who knew him will have their own special memories of this amazing, kind-hearted man. The family would like to extend their thanks and gratitude to Dr. Adam Lammly and staff, Dr. Garbo and staff at New York Oncology and Hematology, and Community Hospice. Due to COVID-19 – funeral service will be held privately, with the Rite of Committal to be held in St. Agnes Cemetery, Menands. In lieu of flowers, those wishing to remember Redmond in a special way may send a contribution to the Food Pantry at Blessed Sacrament Church, 607 Central Avenue, Albany NY 12206 or Community Hospice. To leave a message for the family please visit www.McveighFuneralHome.com

Albany-Redmond Newell, &#8220;Red&#8221;, 92 passed away peacefully at his home, surrounded by his loving family on April 22,2020. Born in Curracuggeen, Headford, County Galway, Ireland, he was the son of the late Thomas and Nora (Brett) Newell,... View Obituary & Service Information

The family of Redmond C. 'Red' Newell created this Life Tributes page to make it easy to share your memories.

Albany-Redmond Newell, “Red”, 92 passed away peacefully at his...

Send flowers to the Newell family.