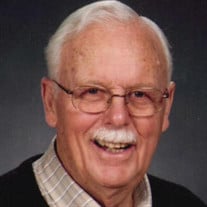 Altamont, NY – Porter E. Bidleman passed away “on the top shelf,” November 24, 2020 at his home with his loving daughters by his side. Born in Lyndonville on May 1, 1926, he was the son of the late Donald and Paulina Porter Bidleman. He spent his childhood on the Bidleman family orchard, and raised chickens alongside his dad, uncle and 3 brothers. Port played basketball in high school where he first laid eyes on a cheerleader from Barker, he unknowingly would later meet, and marry. At the age of 18, he enlisted in the Navy and served his country proudly during WWII on an LCI(R) 1077 as a gunner’s mate. He was assigned to the Asiatic-Pacific Theatre and was present during the assault and occupation of Iwo Jima and Okinawa. Following the war, he returned home to see his cheerleader, “Sally Borresen”, the rest was a love story that lasted for over 68 years. After graduating from Simmons School of Mortuary Science, he worked for Corwin FH in western NY before moving Sally and his 3 daughters to Altamont; where he became the owner of the Fredendall Funeral Home in 1957. He served his community and the Hilltowns for over 40 years with compassion, dedication and respect. A true gentleman and friend, when asked how he was doing, he always replied, “I’m right on the top shelf!” He was an active member of the Altamont Reformed Church, the Altamont Fire Department, Altamont Village Board, Noah Lodge #75, American Legion Post 0977, VFW Boyd Hilton Post 7062, and the Urban Renewal Agency. For years he volunteered at the Guilderland Food Pantry and Community Caregivers. At one time he drove a school bus for the GCSD and Hertz Rental. He and Sally vacationed in Ogunquit, Maine for over 26 years with their family, and friends; where in retirement he spent many years being a Trolley driver. They had some wonderful trips with LCI reunions across the US, and were able to take a Caribbean Cruise, a trip to Switzerland and to Norway. He loved to hunt, fish, camp, ski, hike, golf and bowl. Over the years, he enjoyed daily walks to High Point and the Altamont Fairgrounds where he loved meeting new people. There is no doubt this contributed to his 94 years of life. Many mornings he started his day having coffee with the locals at the Home Front, the Penguin and Stewarts. He was so grateful for his wonderful family, friends, and the blessings that he received over the years; he was humble, and loved people. He is survived by his devoted daughters, Barbara Bidleman of Guilderland, NY, Beth Burlingame of Altamont, NY; his 7 cherished grandchildren, Erin (Sean), Quillinan, Staci (Andrew) Clark, Eric (Heather) Kisby, Alissa Yohey, Mike (Sarah) Yohey, Jason (Katie) Burlingame, and Kara Banks; 15 loving great grandchildren, and many adored nieces and nephews. In addition to his parents, he was predeceased by his wife, Alice “Sally” Bidleman, his daughter, Mary Lou Kisby, 3 brothers; George, Roger and Lewis, and his son in laws, Mark Burlingame and Alan (Sharon) Kisby. Those who wish may make contributions to The ARC Good Samaritan Fund, PO Box 671, Altamont, NY 12009, The Mary Lou Kisby- Elizabeth Severson Scholarship Fund, PO Box 1398, Guilderland, NY 12084, The Guilderland Food Pantry or Community Hospice. Due to Covid restrictions, there will be a private family service. At a later date, a memorial service will be held. Burial will take place in the spring at the Hartland Cemetery, Gasport, NY. Services are provided by McVeigh Funeral Home. To leave a message for the family, please visit www.McveighFuneralHome.com

The family of Porter E. Bidleman created this Life Tributes page to make it easy to share your memories.

Send flowers to the Bidleman family.