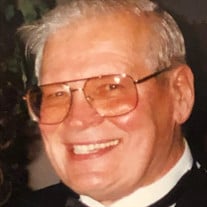 Albany - Peter W. Razanousky, 85, passed away after a brief illness on Tuesday, December 11, 2018 at St. Peter’s Hospital, surrounded by his loving family. Born in Danby, Vermont, he was the son of the late Peter and Mary (Cecot) Razanousky. Peter graduated from Watervliet High School in 1951 and served in the U.S. Army from 1952-54. He was employed for 44 years as a steelworker at Al-Tech Specialty Steel in Colonie, NY, until his retirement in 1995. He was a communicant of The Cathedral of The Immaculate Conception in Albany, NY. Peter was an avid horse enthusiast and a lifelong fan of his beloved Boston Red Sox. Peter leaves behind his wife of 54 years, Josephine (Fratianni) Razanousky. In addition to his wife, Peter leaves behind his children: Michael (Laura) Razanousky of Stuyvesant, John (Lisa) Razanousky of Guilderland, JoAnn (Stephen) Nash of Delmar, Matthew Razanousky of Albany and James (Vernea) Razanousky of Coxsackie. Peter was the beloved brother of Helen (late Donald) Moquin of Poestenkill, Frank Razanousky of Watervliet, Genevieve (Harvey) Robitaille of Latham, Mary Ann (Michael) Moroskey of Melrose and the late Stanley Razanousky and Jennie (late Donald) Heffner. Peter leaves behind his cherished grandchildren Alicia Razanousky, Joseph Razanousky, Eric Razanousky, Colby Nash and Haley Nash. There are several nieces and nephews who Peter leaves behind. Peter would like to give thanks to his dear friends Edwin Kapela, Charlie Michonian, Al Marinucci and the late Ralph Razzano for their lifelong companionship. Relatives and friends are invited to visit with Peter’s family on Sunday, December 16, 2018 from 1:00 to 4:00 p.m. in the McVeigh Funeral Home, 208 North Allen Street, Albany. Funeral services will be held at The Cathedral of The Immaculate Conception on Monday, December 17, 2018 at 10:00 a.m. where a Mass of Christian Burial will be offered. The Rite of Interment will immediately follow at Calvary Cemetery in Glenmont, NY. In lieu of flowers, contributions in memory of Peter, may be made to The Cathedral of The Immaculate Conception 125 Eagle Street Albany, NY 12202-1797. To leave Peter’s family a message on their guestbook, light a candle, obtain directions, or view other helpful services, please visit www.mcveighfuneralhome.com

Albany - Peter W. Razanousky, 85, passed away after a brief illness on Tuesday, December 11, 2018 at St. Peter&#8217;s Hospital, surrounded by his loving family. Born in Danby, Vermont, he was the son of the late Peter and Mary (Cecot) Razanousky.... View Obituary & Service Information

The family of Peter W. Razanousky created this Life Tributes page to make it easy to share your memories.

Albany - Peter W. Razanousky, 85, passed away after a brief illness...

Send flowers to the Razanousky family.