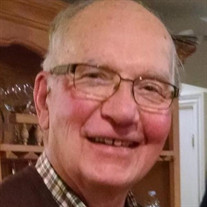 Colonie-Peter E. Platt, 79, of Colonie, passed away peacefully at home on April 29, 2019 surrounded by his family. Born in Albany on March 22, 1940 to Edward and Natalie Platt, Peter attended St Casimir’s School. Peter became a lifelong Colonie resident in 1948 when his family moved to Wolf Road to be near their business, Platt’s Dairy. At that time, Wolf Road was a one lane rural road. He was a 1957 graduate of Christian Brothers Academy. He attended Georgetown University where he worked at the bookstore and thus began his lifelong love of reading and collecting books. Following his graduation, he joined the family dairy and ice cream business. In 1963 he married Jean Ferraro and once again made Wolf Road their home. With the widening of Wolf Road, Peter and Jean moved the house to a residential neighborhood. In 1970, the Dairy evolved into Platt’s Place, which became a thriving restaurant, delicatessen and catering business. Peter was proud of his legacy as a lifelong resident and businessman in the Town of Colonie. Platt’s Place became an area landmark, the place to grab an ice cream cone on a hot summer night or a club sandwich. Peter had a strong commitment to civic and community engagement. He served 37 years on the Town of Colonie Planning Board, including 25 years as Chairman. In 2007 Peter, along with his wife Jean and friend Richard Naylor, wrote and published "Wolf Road: A Century of Development," a history of Wolf Road and its residents. Peter had an optimistic view of life and assumed the best in all people. As a business owner, he had a tireless work ethic, and set an example of commitment, hard work and loyalty for everyone to follow. Peter served two terms as a member of the New York State Supreme Court Committee on Professional Standards. He was a longtime member of the Albany Executives Association and an active member of the New Visions Center providing education and opportunities for the developmentally disabled. He also served on the Board of Directors of Mercy High School. After retiring, Peter continued his dedication to community service. He was a member of the board of directors of St. Peter’s Hospital Foundation as well as his alma mater Christian Brothers Academy. He was a longtime communicant of the former Our Lady of Mercy Parish and then Christ Our Light Catholic Church. He looked forward to his shifts at the Regional Food Bank of Northeastern New York’s branch at the church. Peter was a loyal and generous friend, and was quick to say yes to lunch invitations, card games, fishing trips, and any other opportunity to enjoy a good joke and a well-made Manhattan. Peter was an avid reader and collector of history books, particularly military history and stories of the old western frontier. Following his retirement, Peter and his wife became adventurous world travelers, visiting six of the seven continents. When he wasn’t travelling, Peter was a dedicated fan at the events and activities of his nine grandchildren. He loved to sit in the stands at their baseball, hockey, lacrosse, soccer and basketball games and yell “hubba hubba” after a good play. The most precious of his travels included summer vacations spent on Block Island with his children and grandchildren where he enjoyed fishing, walking the island, reading on Scotch Beach, and nightly family dinners. Peter was predeceased by his parents Edward and Natalie Platt, and his wife Jean. Peter leaves his children Cynthia Platt (Dave Luntz) of Slingerlands, Mark (Jia) of Malden, MA, Laura O’Brien (Bill) of Brookline, MA, Amy Connolly (Paul) of Waltham, MA and Julie Farlow (Tom) of Ithaca, NY; 9 grandchildren: Emma, Andrew and Owen Luntz; Liam, Henry, Seamus and Jason O’Brien; Abby and Douglas Connolly. Peter is also survived by his brothers Jeffrey Platt of Loudonville (Sheila) and Edward Platt, Jr. of Guilderland. The family would like to thank Peter’s friends, nurses and hospice team who were incredibly supportive in the last months of his life. Relatives and friends are invited and may call on Thursday May 2, 2019 from 4:00 to 7:00 p.m. at Christ Our Light Church, 1 Maria Drive, Albany, NY. His Funeral Mass will be celebrated at 10:30 a.m. at Christ Our Light Church on Friday May 3, 2019. The Rite of Committal will be held immediately following the Funeral Mass at Our Lady of Angels Cemetery. In lieu of flowers, those wishing to remember Peter in a special way may send a donation to St. Peter’s Hospital Foundation, 310 South Manning Boulevard, Albany, NY 12208, or to Christian Brothers Academy, 12 Airline Drive, Albany, NY 12205. To leave a message for the family please visit www.McveighFuneralHome.com

The family of Peter E. Platt created this Life Tributes page to make it easy to share your memories.

Send flowers to the Platt family.