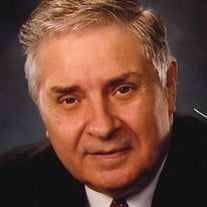 Albany, NY-Paul A. Richter, of Albany, retired New York State Trooper passed on August 1, 2020. Born May 1, 1936 in Woodside, Queens, NY. He was the son of the late Hans and Margaret (Wehinger) Richter. He attended P.S. 152 and W.C. Bryant High School, graduated from L.I. Agricultural and Tech Institute (now SUNY Farmingdale), New York. He also graduated from the New York State Police Academy and the NTC Polygraph School.Paul served in the U.S. Army 1956-1958 with honorable discharge. On May 1, 1960 Paul married Marie Claire Penaud from Niort, France at the St. Jean the Baptiste Church, Manhattan, NY. Paul entered the New York State Police on January 2, 1962. He had served in Troops C and B. He retired as a Zone Sergeant on disability as a result of an on duty shooting incident in Lake Placid, NY on 9/30/1973 during a traﬃc stop. Shot three times, one in the neck area leaving him totally paralyzed from the waist down. After many months of combined excellent care at CVPH, Plattsburg, NY and an intensive rehabilitation program at Sunnyview Hospital, Schenectady, NY he was discharged able to ambulate with a cane and leg brace. For seven months Paul was visited everyday by his devoted family, friends and members of the New York State Police…these visits kept his spirits high. Paul remembered that Christmas 1973 at Sunnyview when the staﬀ asked his brother Carl to dress up as Santa Claus, Paul and his children did not recognize Carl as Santa. He and his family lived in Tupper Lake, NY at the time and moved to Albany, NY in 1980 to get away from the severe winters. Paul always loved the Adirondacks and its people. Paul was a life time member of the New York State Police PBA and the Association of Former NYS Troopers-Adirondack Chapter; a member of the Tupper Lake Mt. Arab Lodge 847, F. & A.M., Tupper Lake Moose Lodge 640, Albany Elks Lodge 49, IPA, American Association of Troopers, Italian-American Heritage Museum, Spinal Cord Society-Capital District Chapter, and the world famous Grump Club. Paul received the NYSP “Brummer Award”, Troy Police PBA “Gold Shield Award”, Warriors on Wheels Award, Burke Rehabilitation-Research Program Citizen Award, and the Jeﬀerson Award for Public Service. Paul was a gubernatorial appointee by Gov. George Pataki to serve on the NYS Spinal Cord Injury Research Board, which he proudly served on for 16 years without monetary compensation. Paul always was appreciative of the assistance he received from fellow board member, Dr. Allen Carl, making it possible for him to attend each meeting. After Pauls injury, he directed his energy as an active advocate for the funding and research toward finding a cure for spinal cord injury paralysis. He was involved in the Spinal Cord Society Capital District Chapter’s annual research fund benefit for 30 years. He found pleasure when he was a volunteer driver for many years for the St. Peters Hospital mobile meals with fellow volunteer, Eleanor Finkelstein. Paul was the driving force and Chairman behind the creation of the “Gray Rider Trooper” monument project which is in front of the New York State Police Academy and was dedicated on 9/30/1993, exactly twenty years to the day of his injury. He also initiated a state wide grassroots research board/program which has funded over 90 Million dollars to researchers in NYS. Paul gave his time and money to see these projects thru to completion. Paul often said, “what ever accomplishments I may have been fortunate enough to have achieved, it is because of the constant loyal support and help from my family, friends, volunteers, law enforcement community and the Grumps. Paul enjoyed time with his family, helping others, driving his vintage Chevy Caprice Sedan, the few winters he spent in sunny Florida and lunch with friends at Dee Dee’s Tavern. He appreciated the fine customer service from Lev Shoe Repair, Ragonese Imports and the Lucky Garden Restaurant, Paul’s Garage and always the help he received from Dr. Carl’s assistant Shanti. Paul missed his pre-injury days of in Tupper Lake of hunting, fishing, camping, golfing and skiing. Survivors include his wife, Marie Claire, six children; Valerie (Michael) Burdo, Christine (Lance) Richardson, Claudine (John) Costello, Lisa (Carl) Albright, James (Kristin) Richter, John Richter and partner Katie O’Keefe; his brother Carl Richter, grandchildren; Olivia Richter, and Maryna and Andrew Richardson and his many friends. Paul was very proud of the accomplishments of his six children which he attributed to their hard work and their mother, Marie, who dedicated her life to her family. Our family would like to thank the nurses at St. Peter’s Hospital Community Hospice Inn for taking such great care of Paul in his last moments. Relatives and friends are invited to visit with Paul’s family Friday, August 7, 2020 9:00 am to 10:45 am at McVeigh Funeral Home, 208 North Allen Street, Albany, NY 12206 (Please only enter the funeral home from the rear parking lot doorway; Masks and Social Distancing are required; and 40 visitors at a time will be allowed in the funeral home) and then continue on with a New York State Trooper Escort to the Gerald BH Saratoga National Cemetery for a 12:30 pm Service with Military Honors. To leave a message for the family, please visit www.McveighFuneralHome.com In lieu of flowers, friends wishing to remember Paul may consider a contribution to Sunnyview Rehabilitation Hospital Foundation, 270 Belmont Avenue, Schenectady, NY or the NYS Troopers PBA, Signal 30 Fund, 120 State Street, Albany, NY 12207.

Albany, NY-Paul A. Richter, of Albany, retired New York State Trooper passed on August 1, 2020. Born May 1, 1936 in Woodside, Queens, NY. He was the son of the late Hans and Margaret (Wehinger) Richter. He attended P.S. 152 and W.C. Bryant High... View Obituary & Service Information

The family of Paul A. Richter created this Life Tributes page to make it easy to share your memories.

Send flowers to the Richter family.