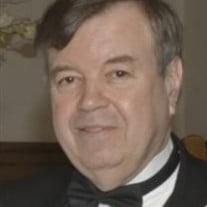 Albany-Paul V. Oliver, 76, passed away peacefully surrounded by his loving family on May 26, 2020. Paul was born in Albany, son of the late Vincent and Margaret (Cahill) Oliver. As a graduate of Christian Brothers Academy and Siena College, Paul went on to attend Albany Law School. Following graduating, Paul became an attorney and started his own legal practice. After retiring from his law career, Paul and his wife opened a restaurant, La Casa di Canali in Guilderland. He later became a professor of paralegal studies at Mildred Elley College. Most recently, he served as a court attendant for the Albany County Judicial Center in Albany. As a life-long Catholic and devout worshiper at Holy Cross Church in Albany, Paul was awarded the honor of Man of the Year for his devotion as a volunteer for both the church and school. He took great pride in coaching his boys at Westland Hills Little League, Playdium youth bowling league, and CBA rifle team. In addition to coaching, Paul was an avid fan of the New York Yankees. His passion for baseball and his favorite team was passed along to his sons and grandchildren. In his free time, Paul enjoyed collecting stamps, rare coins, and reading historical texts. He devoted his life to his family, taking great pride in the talents and accomplishments of his children and grandchildren. Paul will be greatly missed by all who knew him, but created wonderful memories that no amount of time can erase. Paul is survived by his wife of 49 years, Gabriella Oliver, of Albany, his son Paul Oliver II and wife, Jennifer Oliver, of Clifton Park, and son Joseph Oliver and wife, Allison Oliver, of Guilderland. He was the beloved grandfather of Matthew and Emily Oliver of Clifton Park. A private graveside remembrance ceremony will be held outside the mausoleum at St. Agnes Cemetery, Menands. Those wishing to remember Paul in a special way may send a contribution to St. Jude Children’s Research Hospital, 501 St. Jude Place, Memphis, TN 38105. To leave a message for the family, please visit www.McveighFuneralHome.com

Albany-Paul V. Oliver, 76, passed away peacefully surrounded by his loving family on May 26, 2020. Paul was born in Albany, son of the late Vincent and Margaret (Cahill) Oliver. As a graduate of Christian Brothers Academy and Siena College,... View Obituary & Service Information

The family of Paul V. Oliver created this Life Tributes page to make it easy to share your memories.

Send flowers to the Oliver family.