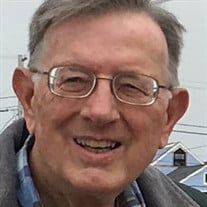 Rockport MA-Paul A. Makowski, 75, of Rockport, Massachusetts passed away peacefully with his family by his side on Friday, April 26, 2019 at Seacoast Nursing and Rehabilitation Center in Gloucester, Massachusetts following a long and courageous battle with cancer. Paul was the husband of Virginia “Ginny” (Burliuk) Makowski with whom he shared many years of marriage. Born on July 4, 1943 in Albany, New York, Paul was the son of the late Andrew and Stephanie (Small) Makowski. He was a graduate of Vincentian Institute High School in Albany, Class of 1961. He received a Bachelor’s Degree in Accounting from Niagara University and a Master’s Degree in Business Administration from the State University of New York at Albany. Paul worked for many years in the business and financial fields, beginning with the accounting firm of Haskins and Sells in New York City after graduating from college. During his early career, he worked as an accountant/comptroller for various companies including IBM, The Poughkeepsie Journal, and Westchester Rockland Newspapers. In later years he helped restructure small to midsize companies, and successfully took one company public on the NYSE, (an IPO). Before his retirement, he worked as an accountant for the Boston Public Library. Paul’s faith was an important part of his life. He was always an active member of his parish and he generously supported his church, his community, and numerous missions. Paul was an enthusiastic supporter of the Rockport Millbrook Meadow Conservancy and, as recently as 2017, he was one of the advisors to the committee. He was an avid golfer. At the age of 12, Paul started to caddy at the Albany Country Club, sparking a lifelong passion for the game of golf. He enjoyed sports (especially baseball), reading, traveling, good cuisine, and spending time with his family and friends. Paul was a devoted husband, father, grandfather, brother, uncle and friend. Our family would like to express our thanks to everyone at Addison Gilbert Hospital and Seacoast Nursing and Rehabilitation Center for the wonderful care they provided. Paul is survived by his wife, Ginny; a daughter, Vanessa Savlen and her husband Louis of Rockport; his sister, Carol Makowski of Albany, New York; his grandchildren, Sawyer and Quinten Savlen; his nieces, Judith Dougherty and Susan Sendzicki of Albany, NY; his nephew, Stephen Gorzynski of Dunedin, Florida; and several other relatives. He was predeceased by his sister, Joan Gorzynski and her husband, Theodore; and by his nephew, Stanley Gorzynski. Friends may call at All Saints Catholic Church, 16 Homestead St, Albany, NY on Saturday, May 25, 2019 at 9:00 a.m. A Memorial Service will be held at 10:00 a.m. followed by burial at Our Lady of Angels Cemetery in Colonie. In lieu of flowers, donations may be made in Paul’s memory to Holy Family Parish, Gloucester, MA (ccgronline.com); Rockport Millbrook Meadow Conservancy (millbrookmeadow.org); American Cancer Society; or to a charity of one’s choice.

Rockport MA-Paul A. Makowski, 75, of Rockport, Massachusetts passed away peacefully with his family by his side on Friday, April 26, 2019 at Seacoast Nursing and Rehabilitation Center in Gloucester, Massachusetts following a long and courageous... View Obituary & Service Information

The family of Paul A. Makowski created this Life Tributes page to make it easy to share your memories.

Send flowers to the Makowski family.