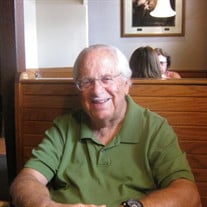 Troy-Patrick John Sheridan was born in Troy, NY on February 14, 1938, the cherished only child of Sara E. and Patrick P. Sheridan. He left this life from St. Peter's Hospital on Friday, December 1, 2017 surrounded by his loving family. His passing marked the end of a long, courageous battle against several medical issues. Pat will be dearly missed by many. Patrick lived in and loved Troy, NY for most of his life attending grade school and high school in the city before going to Providence College in Rhode Island earning his B.S. degree. He went on to receive an MBA from Siena College in 1966. He returned to his Alma Mater to teach finance at Siena for 27 years. Upon his retirement, he was awarded the distinction of Emeriti status. He was one of the students' favorites. His classes were always in demand with students declaring they were majoring or minoring in "Sheridan." Beyond the classroom, he served the College and student body in several ways. He sat on many committees and was the Finance Department Head for over ten years. He initiated an internship program in which he used his many local business connections to help students get valuable work experience. Pat also coached the Siena hockey team taking it to national championship tournaments. Many alumni have expressed their love and respect for Pat as their great friend and mentor. Over the years they kept in contact with him, invited him to their weddings, etc. Pat embraced his life and everyone in it with a positive attitude, witty humor, and an impish sense of mischief and adventure. He loved to pretend to be a curmudgeon, but it could not disguise his huge Irish heart and charm. He heartily celebrated his namesake's day every year and was a lifelong communicant of the Catholic church. Pat was accomplished in countless areas. He was a talented and self-taught carpenter gutting and rebuilding two homes with his beloved wife of 33 years, Mary DiPace Sheridan. He was also an avid dancer attracting spectators when he twirled his Mary Rosa around the floor, a hockey player and a gardener gifting us with a profusion of flowers to brighten our world. Although he was a loyal Trojan, he was equally at home in the woods or on the water hunting and fishing. His love of pasta was one of his most endearing and enduring qualities. On the rare occasions he didn't cook his own, he patronized his favorite spots, while dreaming of owning his own "Paddy's Pub and Pasta Parlor”, Irish ambience and Italian food. Pat succeeded at a variety of jobs besides being a professor and coach including home builder, stockbroker, insurance and real estate agent and building inspector. He was a man who adored and advocated for his wife, family and friends. He taught his children to play hockey and camp at early ages. He was a father, who allowed his children to be independent and learn from their mistakes. His loving spirit endeared his doctors and casual acquaintances. He generally shared his vast knowledge without arrogance. Pat was predeceased by his parents and his much-loved Golden Retriever, Suzy Q. He is survived by his devoted wife, Mary, his children: Erin Rezey (Paul), P. Michael Sheridan, Matthew Sheridan and Meghan Sheridan (Jeremy Adams). Pat will be mourned by his sisters and brothers in-law and many nieces and nephews. He also leaves 3 grandchildren: Deanna and Tara Rezey and Brandy Brady and 4 great-grandchildren, Jordan, Bud, Tori, and Kenzie and his lovable puppy, Rosie. Those who wish to contribute in Pat's name may send it to University Parish of Christ Sun of Justice at 2125 Burdett Avenue, Troy, N.Y., 12180. Please make checks payable to The Rensselaer Newman Foundation. To leave a message for the family please visit www.McveighFuneralHome.com. Calling hours will be Tuesday, December 5, 2017 from 4pm to 7pm at McVeigh Funeral Home, 208 North Allen St., Albany, N.Y., 12206. The funeral will be on Wednesday, December 6, 2017 at 9 a.m. from McVeigh with a mass following at University Parish Christ Sun of Justice. Interment will be at St. Mary’s cemetery, Troy, NY, after the mass.

Troy-Patrick John Sheridan was born in Troy, NY on February 14, 1938, the cherished only child of Sara E. and Patrick P. Sheridan. He left this life from St. Peter's Hospital on Friday, December 1, 2017 surrounded by his loving family. His passing... View Obituary & Service Information

The family of Patrick J. Sheridan created this Life Tributes page to make it easy to share your memories.

Troy-Patrick John Sheridan was born in Troy, NY on February 14,...

Send flowers to the Sheridan family.