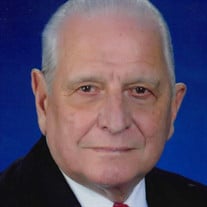 Loudonville-Patrick D. Monserrate, age 86, passed away peacefully at home on February 13, 2022 surrounded by his loving family. He is survived by his daughters Martha (Bart) McDade of Rye, NY; Michele (Sean) Doolan and Nicole Monserrate (Lance Sullenberger) of Loudonville, NY; his brother Manuel of New York City; and his “magnificent seven” grandchildren Conor and Colin McDade, Sean and Caroline Doolan and Mary Kate, Evan and Cole Sullenberger. Patrick was predeceased by his beautiful wife of 48 years, Virginia DeLucia, and his parents Dr. Manuel Monserrate and Martha (Doody) Monserrate. Pat was born on March 14, 1935 in New York City. In 1936, the family moved to Binghamton, NY where his father practiced medicine out of the family home for 40 years. He graduated from The Canterbury School in New Milford, CT in 1953; Georgetown University in 1957; and Albany Law School of Union University in 1960. Following graduation from law school, Patrick entered private law practice in Binghamton where, in his words, John Normile and Frank Ondrusek taught him to be a lawyer. During this time, Pat also started his career in public service, working part-time as an assistant District Attorney and later as a part-time City Court Judge. In 1970, he was sworn in as the District Attorney for Broome County, and served in that office for 10 years. His goals as DA were simple: to hire good people (Hon. Gary Sharpe and Jon Blechman among them) and to ensure that the criminal justice system in Broome County was marked by straight talking and fair dealing. He often expressed that his greatest professional honor was to stand before a jury and proudly represent the People of the State of New York. Patrick became a Broome County Court Judge in 1981 and a Supreme Court Justice in 1989. During his tenure on the bench, he took pride in writing honest and clear decisions which may have been wrong occasionally, but never misunderstood. He enjoyed the company and camaraderie of the lawyers who appeared before him, and formed close bonds with the court reporters and court officers, all of whom he always treated with utmost respect. Pat retired from the bench in 2003 and, with the aid of Kristen Harding, his longtime assistant, friend and “right hand”, he started an alternative dispute resolution practice. This endeavor served as his lifeblood because it allowed him to continue doing what he loved professionally, including maintaining relationships with lawyers across upstate New York. He was grateful for this extension of his career, and cited it as one of the reasons he remained mentally sharp. Another source of Patrick’s continued zest for life was his affiliation with Siena College, where he served as the Distinguished Jurist in Residence for the past 8 years. He embraced his role as mentor of bright college students who aspired to careers as trial lawyers, and enjoyed every minute of their company. Many thanks to Dr. Len Cutler, Director of Siena’s Pre-Law Program and Professor of Political Science and Public Law, whom he both admired and considered a dear friend. While Patrick was bestowed with so many blessings in his life, he considered the greatest to be his family, especially his late wife, Ginger. He adored his daughters, sons in-law and grandchildren, and never missed the opportunity to celebrate a family event, provide words of encouragement and pearls of wisdom or revel in the chaos of a vacation gathering. Pat was a master of humorous “one-liners” and the loving author of the famous family poems, which will live on in our memories and bring both smiles and tears as we honor his legacy. The family will hold a private service, and will host a celebration of Patrick’s life in the spring. He loved a good party, and will definitely attend in spirit. The price of admission will be a good “PDM story” to share. In lieu of flowers and donations, his wishes were that you take an old friend to lunch, share a bottle of wine and toast your friendship.

The family of Patrick D. Monserrate created this Life Tributes page to make it easy to share your memories.