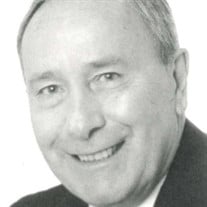 Albany-Patrick Dennis McCarville passed peacefully on Wednesday, March 2, 2022. Patrick was born April 23, 1929 in Fort Dodge Iowa, son of Floyd McCarville and Verla Gist McCarville. Pat attended Christian Brothers Academy, The College of St. Rose and Siena College earning a Masters Degree in Economics. Pat was in the Navy Reserve for five years, training on the U.S.S. Wisconsin, and then served as a Sergeant in the US Air Force for four years. He was stationed at Thornbrough Air Force Base in the Aleutian Islands in Alaska at Cold Bay which was part of the Distant Early Warning System to monitor Russian aircraft.. He began a 40 year career with the New York Telephone Company as a lineman, eventually becoming the Director of the Yellow Pages. After retirement he became the Constituent Liaison for NYS Senator Howard Nolan for many years. He retired again to become the Coordinator of the Capital Region Private Industry Council. Patrick was involved in community service for many years and was actively involved in local politics as Democratic Committeeman, 13th Ward Leader., campaign manager for a number of political offices and served on the Albany Water Board. He worked with Father Peter Young in the St Vincent de Paul Society, was a Catholic Eucharistic Minister at local hospitals and was an active member of the Catholic Church Family Movement and took his family on service missions to the Appalachian Mountains. For many years he coordinated the volunteer corps for the Center for Disability Services and the United Way. He was an Olympic torch relay team driver for the 1984 Los Angeles Summer Olympics driving the convoy from New York to California. He was a member of the NY Telephone Pioneer Club, the American Legion and the 50 Gallon (400 pints) Blood Donation Club of the American Red Cross. He was a world traveler visiting Siberia and all of Europe, traveling on the Orient Express, and took a few banana boats through the Panama Canal to South America. He had a deep appreciation for the American West, white water rafting in the Colorados, horse back riding in the Sierra Nevadas, and Jackson Hole, Wyoming and taking adventure trains through the Copper Canyon in Mexico. He actively supported the St.Labre Indian School in Montana which provides a Roman Catholic education to the Crow and Cheyanne tribes. A heartfelt thank you to aides Dee and Kara, staff at Delmar Center, and staff at St. Peters Hospital. He is predeceased by Ann Radigan McCarville and survived by his wife Mary Ann Clouse McCarville and daughters Patricia Nonamaker (James), Molly Sinnott (Paul), Ellen Sullivan, Cathleen Bradt (Michael) and Peter Clouse (Mary), Therese Butts (Thomas); sister Katherine, Daniel (Mary Lou), Thomas (Ann), David (Tina) and and grandchildren Molly Sullivan (Samuel), James Nonamaker, Kevin Sinnott, Jack Sullivan, Kathryn Nonamaker, Ann Leeper (Christopher) Mark Sinnott, Patrick Bradt, Elizabeth Bradt and great grand children Theodore, Frances and Margaret and survived by numerous nieces and nephews. Funeral services will be held privately. To leave a message for the family please visit www.McveighFuneralHome.com Donations can be made to St Labre Indian School https://www.stlabre.org/ways-to-give/

The family of Patrick Dennis McCarville created this Life Tributes page to make it easy to share your memories.