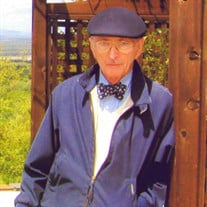 Albany - Norman Shepard Rice, 95, and a pillar of the Albany, New York, cultural community for nearly seventy years, slipped peacefully away on October 22, 2021, in Albany. He was born in Salem, Massachusetts, on August 11, 1926, the son of Bertram Upton Rice and Edith Williams Rice, and was raised in nearby Marblehead. He earned two degrees from Harvard University, a Bachelor of Arts in history and fine arts (1949) and a Master of Arts in education (1951). Following two years as a Teaching Fellow in the Harvard Graduate School of Design, Norman arrived at the Albany Institute of History & Art, where he would spend fourteen years as the inaugural curator of collections (1953–1967) and the next nineteen years as director of the Institute (1967–1986). A proud native of Essex County who never lost his distinctive eastern Massachusetts accent, Norman thoroughly embraced the Upper Hudson Valley, developing a deep and encyclopedic knowledge of its history, a particular interest in its architecture and fine and decorative arts, and a special fascination for the men and women who assembled great collections of cultural objects. From the time of his arrival, Norman’s guide to the city was James Gwynn, an artist born and raised in Albany, who was his life partner for sixty-two years. The impeccably dressed couple were omnipresent at lectures, celebrations, luncheons, dinners, benefits, and other events—especially any happenings at the Fort Orange Club—including those where Norman was being honored or had been engaged to speak. He was fluent on a wide variety of topics, some likely discovered during two decades as the Albany City Historian (1966–1987), and others simply the product of his boundless curiosity. Though the Albany Institute was always his primary focus, Norman established a holistic approach in his personal support of the region’s cultural organizations. In over forty years of community service, he was concurrently a trustee or advisor for institutions from Hamilton College and the Munson-Williams-Proctor Arts Institute east to the Rensselaer County Historical Society, Berkshire Museum, and Williamstown Art Conservation Center. Most of his board involvement, however, was in Albany, including the city’s Historic Resources Commission, Saint Andrews Society, Historic Albany Foundation, Society of Architectural Historians Turpin Bannister Chapter, Albany County Historical Association, Shaker Heritage Society, Historic Cherry Hill, Albany Public Library, Friends of the New York State Library, and Albany Rural Cemetery, where he was the board’s longest-serving trustee and could often be found out on the grounds giving tours. Norman was also a leader in planning significant local commemorations, serving on the Albany Tricentennial Commission and the Albany Medical College Sesquicentennial Committee. He enthusiastically joined commissions formed to restore and preserve the New York State Capitol, the New York State Senate Chamber, the Executive Mansion, and the Thomas Cole House in Catskill. He organized scores of exhibitions for the Albany Institute, authored scholarly catalogues on Albany silver and New York furniture, wrote journal articles, contributed to publications by his colleagues, and donated hundreds of items to the Albany Institute’s museum and library collections. Recognized for these and other achievements, Norman received an honorary Doctor of Fine Arts degree from Siena College in 1986. In reviewing his accomplishments, he was heard to say, “I don’t know how I had time to do it all,” but he did do it all, and in a style that was all his own. Norman S. Rice was predeceased by his partner James E. Gwynn in 2015, and his brother William Marshall Rice in 1999. He is survived by his sister-in-law Ann Wilson Rice, nephews and nieces William (Stephanie) Rice Jr., Peter (Nancy) Rice, Linda (Edward) Collins, Susan (Robert) McNeil, and Dr. James (Carol) Rice, all of Marblehead, several great-nieces and nephews, and by his many friends and colleagues whose lives, too, will never be the same without him. All wish to thank Chuck Tiley for his steadfast support of Norman and Jim, and to Sonya Barnes and the team of aides who removed every obstacle in Norman’s path during the past two years. Norman’s Funeral Service has been rescheduled for Saturday, June 18, 2022 at 11:00 am at the Cathedral of All Saints, 62 South Swan Street, Albany. Memorial contributions may be sent to the Norman Rice Memorial Fund, Albany Institute of History & Art, 125 Washington Avenue, Albany, New York 12210-2202. To leave Norman’s family a special message on his guestbook, obtain directions, or view other helpful services, please visit www.mcveighfuneralhome.com

Albany - Norman Shepard Rice, 95, and a pillar of the Albany, New York, cultural community for nearly seventy years, slipped peacefully away on October 22, 2021, in Albany. He was born in Salem, Massachusetts, on August 11, 1926, the son of... View Obituary & Service Information

The family of Norman S. Rice created this Life Tributes page to make it easy to share your memories.