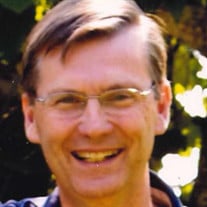 Albany - Neal J. Benoit, age 58, passed away on May 25th, 2019. Neal was an “Independence Day baby,” born on July 4th in Ticonderoga, NY. Neal went to Warrensburg High School and later earned two bachelor’s degrees from Siena College in Computer Science and Accounting. Neal worked as a self-employed computer consultant for his adult life, but his passion was in writing, teaching and helping others. He was an inspiration to many, and always encouraged people to be the best versions of themselves. To that end, he began a self-help blog called “Daring Ways”, where he shared his wisdom on taking chances and living life to the fullest. He also started a blog educating others on the sport of horseracing, which was his favorite pastime. He loved summer days at the Saratoga racetrack, drinking a beer and reading the racing form surrounded by his family and friends. He was a gentle, caring, and loving man who was loved in return by so many. He was a true family man, and he cherished his wife and two children above all else. He was a kind and patient father and a devoted and loving husband. Neal is survived by his wife of 36 years, Deborah (Vautrin) Benoit, who was the love of his life and soulmate. He is also survived by his two children, Michael Benoit and Courtney Benoit, who he was so very proud of. The greatest joy of his life was raising his kids and watching them grow. He was the son of Neila Benoit and the late Norman Benoit, and brother to Tracy (Tammy) Benoit and Eric (Sandra) Benoit. He was uncle to numerous nieces and nephews, and son-in-law to the late Laurette and William Vautrin, who he loved and cherished dearly. He is survived by a multitude of devoted friends, who offered him unending support and love throughout his life and recent illness. To leave a message for Neal’s family, light a candle, or view other helpful services, please visit www.mcveighfuneralhome.com

The family of Neal J. Benoit created this Life Tributes page to make it easy to share your memories.

Send flowers to the Benoit family.