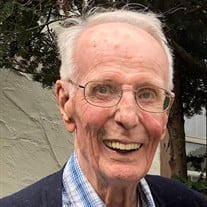 Albany - Our beloved father, Michael J. Sheehan, Jr, 95, died at home November 20, 2020. He was born at home in Albany in 1925, the son of the late Michael J. Sheehan (Cork, Ireland) and Helen Thomson Sheehan. A graduate of the former Vincentian Institute, he received a Bachelor of Science in Civil Engineering from Rensselaer Polytechnic Institute after serving in the US Army during World War II. At RPI he was elected to Chi Epsilon, Tau Beta Pi, and Sigma Xi honorary fraternities. He received a Master of Public Administration from the Maxwell School of Syracuse University. Michael joined the Army and was accepted into the Army Specialized Training Program (ASTP) in 1943. After almost completing basic training at the Infantry School in Fort Benning, GA, the ASTP was cancelled to facilitate the planned invasion of Europe. He was assigned to the 100th Infantry Division and then to a newly-formed Group Artillery Organization (212th), which entered combat in Europe during the Battle of the Ruhr Pocket under US 9th Army General Simpson. He was then transferred to the 90th Infantry Division (Texas and Oklahoma) under US 3rd Army General Patton and finally to the US Army 116th General Hospital in Nurnberg, Germany. He was honorably discharged as Staff Sgt. in June 1946. Michael was licensed as a Professional Engineer and retired in 1987 as Principal Engineer after 37 ½ years with the NYS Department of Transportation Structures and Railroad Divisions. He served as project manager for many million-dollar projects to separate highway-railroad crossings, including several projects on Long Island that introduced innovative railroad construction techniques into the USA. Michael’s beloved wife for 66 years, Frieda Pankratz Sheehan, his European war bride, predeceased him and he hopes now to join her in Heaven “für immer und ewig”. He was predeceased by his only sister, Helen Marie Sheehan Thayer. He loved his family, devoting his life to caring for them and enjoying their progress through life to have careers and families of their own. As a Dad, he was generous in all ways, a role model sharing advice and life stories and planned great Cape Cod vacations. In his later life, his memory was astonishing and only the unwise would challenge his facts. As Opa, he was famous for his story-telling of classics like the 7 Servants and Bobby Benson, playing board games, and cartoon drawings in the many personal letters he sent to mark everyone’s special occasions. With his grandson Matt, he was the proud founder and member of the Mushroom Club. He loved Frieda’s German cooking and all things chocolate, doing cryptoquip puzzles and was an avid book club member. He was the family historian having researched and created a genealogy binder for each family. Affectionately known as the Town Crier, he shared family news and his opinions, with anyone kind enough to stop and listen. Our thanks to all those who did. In later years, he and Frieda traveled to Europe to visit family and friends and to sightsee with their friends Dick and Ruth Wiita. Michael said that Frieda enriched his life by exploring European Old-World culture and charm. On the streets of Albany, they were a frequent sight walking hand in hand, and when Frieda’s health began to fail, he devoted himself to her every need. We would like to thank Karen Urbanski, retired principal of Rensselaer High School; Jennifer Ward, retired librarian at the John Bach Albany Public Library; neighbor and beekeeper Linda Houlihan; and his many work friends especially Fred Eckel for their many kindnesses to our father over the last few years. His son-in-law Jerry Towle was kind and helpful and always willing to listen to one more story. And as Michael wrote, “I must give my special thanks to my daughter Angela for the help she has given to me since my wife Frieda (her mother) died in 2013. I could not have survived without her. I call her ‘Saint’ Angela.” Survivors include daughters, Karin Rickards (John) of Storrs, CT; Michele Danish (Jerry) of Barrington, RI; Angela Sheehan (Franklin Laufer) of Delmar, NY; and Colleen Towle (Jerry) of Albany, NY; and sons, Peter Sheehan (Angela) of Annapolis MD, and Stephen Sheehan (Peggy) of Old Saybrook, CT. He was the proud Opa to 17 grandchildren: Kristine, Claire, Susanne, Caroline, Matthew, Alison, Rachel, Bradley, Justin, Meghan, Caitlin, Tara, Conor, Kevin, Michael, Kelly and Maria, and 16 great-grandchildren. A Funeral Mass will be held at Mater Christi Church, 40 Hopewell St., Albany, NY at 11:00 am on Monday, November 30, 2020. Please enter the church from the parking lot doorway; masks and social distancing are required; church ambassadors will help with seating; and please arrive before 10:45 am. The Funeral Mass will be live streamed at www.youtube.com/c/parishofmaterchristi. Burial will be immediately following the Funeral Mass at St. Agnes Cemetery, Menands, NY. A memorial celebration to be held in 2021 will be announced at a later date. In lieu of flowers, contributions may be made to his favorite charity, the Capital City Rescue Mission, PO Box 1999, Albany NY 12201. To leave Michael’s family a message on their guestbook, light a candle, obtain directions, or view other helpful services, please visit www.mcveighfuneralhome.com

Albany - Our beloved father, Michael J. Sheehan, Jr, 95, died at home November 20, 2020. He was born at home in Albany in 1925, the son of the late Michael J. Sheehan (Cork, Ireland) and Helen Thomson Sheehan. A graduate of the former Vincentian... View Obituary & Service Information

The family of Michael J. Sheehan, Jr. created this Life Tributes page to make it easy to share your memories.

Send flowers to the Sheehan, family.