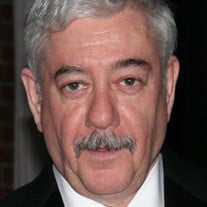 Niskayuna-Michael D. Reilly II joined the dearly departed on October 31, 2021 at home in the presence of family. Born September 27, 1946, he was the first son of Dermot C. Reilly and Margaret T. (Rayno) Reilly, in Albany NY. He attended high school at Vincentian Institute, eventually earning Bachelors and Masters degrees in Mechanical Engineering from SUNY Buffalo. Michael served four years in the US Air Force, including a tour in Vietnam. He was awarded the Air Force Commendation Medal. He worked 43 years at Knolls Atomic Power Lab, 33 as an engineering manager. He was especially proud of his alumni who went on to distinguish themselves in the management ranks at the laboratory. Michael is survived by his loving wife of 49 years, Barbara (Betts) Reilly, his two children Meghan (Darren) Vian of Halfmoon, Brian M. Reilly of Troy, two of the world’s cutest grandchildren, and a charming niece. He is also survived by his siblings, Ellen (Morgan) Desmond, Jerrold B. Reilly, and Margaret T “Meg” (Peter Bianucci) Reilly, all of Novato California. Michael enjoyed hunting, salt water fishing, prime steaks, fine cigars, and single malt scotch. He was a lifelong competition rifleman. In 2001, he won the New York State Long Range championship, and later that year competed for a berth on the United States Palma Team. He served as president of Forbes Rifle and Pistol Club, Inc. for several years, and continued as a director until his death. Relatives and friends are invited to visit with Michael’s family Thursday, November 4, 2021 4:00 pm to 7:00 pm at the McVeigh Funeral Home, 208 North Allen Street, Albany, NY 12206. Please only enter the funeral home from the rear parking lot doorway. Unvaccinated individuals must wear a mask and practice social distancing. Funeral services Friday, November 5. 2021 9:30 am at St. Joseph’s Church, Troy where his Funeral Mass will be celebrated. The Rite of Committal will be held at St. Agnes Cemetery, Menands, NY immediately following the service. To leave a special message for the family please visit www.McveighFuneralHome.com In lieu of flowers, donations can be made to the National Rifle Association or the American Cancer Society.

Niskayuna-Michael D. Reilly II joined the dearly departed on October 31, 2021 at home in the presence of family. Born September 27, 1946, he was the first son of Dermot C. Reilly and Margaret T. (Rayno) Reilly, in Albany NY. He attended high... View Obituary & Service Information

The family of Michael D. Reilly II created this Life Tributes page to make it easy to share your memories.

Send flowers to the Reilly family.