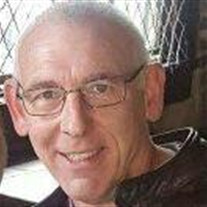 Troy- Michael Armando Parente died unexpectedly but peacefully on May 18, 2018 in Troy, NY at the age of 58 surrounded by his loving family. Michael is survived by his father Armando Parente, his devoted wife Donna Parente, his five children, Tina (Eric) Badrick, Rachael (Adam) Mullen, Kristin (Kyle) Pucci, Megan (Daniel) Rigney, and Kevin (Arianna) Parente and three step-children Natalie (Thomas) Recktenwald, Steven Partyka, Sandra (Bryan) Partyka. Michael also was a caring brother to Thomas (Linda) Parente, Steven (Victor) Parente and Anne-Marie (Brian) Nolan. He was a proud grandfather to eight grandchildren with one more on the way. Also survived by his Uncle Gerald (Aunt Karen) Lefebvre Sr. and many cousins, nieces and nephews. Michael was predeceased by his mother Jeanne Parente in October 2017. Michael was born on September 13, 1959 in Troy, NY to Armando and Jeanne Parente. He graduated from Keveny Memorial Academy in 1977 and from Hudson Valley Community College in 1979 with an Associates Degree in Accounting. He married Donna Bryans- Partyka-Parente in 2016 and has never been happier. Michael grew up in Watervliet, NY and lived there until 2016 before moving to Cohoes, NY. He began working for Cohoes City School District in 2014. Michael enjoyed nothing more than spending time with his grandchildren, sitting by his charcoal grill and smoking a pork shoulder for his family and friends. He also loved vacationing at the beach with his wife, spending his New Year’s around the world and NASCAR racing. Michael remained an active member of Mount Carmel Church in Watervliet, NY until its closing. We would like to express heartfelt thanks to Dr. Resta and her staff at N.Y.O.H along with the staff on the 6th floor and ICU at Samaritan Hospital for their exceptional care and compassion. Relatives and friends are invited to visit with Michael’s family on Tuesday, May 22, 2018 from 5:00 to 8:00 pm in the Parker Bros Memorial Funeral Home, 2013 Broadway, Watervliet. Funeral services Wednesday, May 23, 2018 at 10:00 am from Parker Bros Funeral Home thence to The Church of the Holy Trinity, 122 Vliet Blvd, Cohoes at 11:00 am where Michael’s Funeral Mass will be celebrated by Father John Lanese. All are welcome to attend and celebrate Michael’s life. In lieu of flowers, please send donations to the Leukemia Lymphoma Society at 1 Marcus Blvd #104, Albany, NY 12205 or N.Y.O.H at 258 Hoosick St. #206 Troy, NY 12180. To leave Michael’s family a message on their guestbook, light a candle, obtain directions, or view other helpful services, please visit www.mcveighfuneralhome.com

Troy- Michael Armando Parente died unexpectedly but peacefully on May 18, 2018 in Troy, NY at the age of 58 surrounded by his loving family. Michael is survived by his father Armando Parente, his devoted wife Donna Parente, his five children,... View Obituary & Service Information

The family of Michael Armando Parente created this Life Tributes page to make it easy to share your memories.

Send flowers to the Parente family.