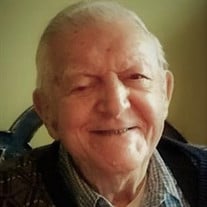 NISKAYUNA - Michael Anthony “Mike” Norelli, Jr., age 91, entered eternal life Monday, November 19, 2018 at Ellis Hospital surrounded by his loving family. He was born in Waterbury, CT to the late Michael A. Norelli, Sr. and Rose Diorio Norelli. He served in the United States Navy during WWII as a member of The Fighting Seabees in the Pacific Region. After the war he attended Brooklyn Polytechnical Institute where he received his degree in Electrical Engineering and went on to a successful career working for several large information technology corporations, including Remington Rand where he was part of the engineering team that created the first mainframe computer system (UNIVAC) in 1949. Upon retiring as an executive from Pitney Bowes in the late 1980’s, Mike and his wife moved to Albany, NY to be close to their children and grandchildren. His pride and joy was his family. He was a devoted husband, father, grandfather, and great grandfather. He was predeceased by his wife of 50 years Anna Sanchi Norelli. Mike is survived by his seven children Michael A. Norelli III (Rosemary), Dr. William Norelli (Kathy), David Norelli, Rosemary Gurn, Ann Norelli (William Flanagan), Thomas Norelli (Sandy), and Patricia Myers. Also survived by eleven grandchildren Michael A. Norelli IV (Maria), Daniel V. Norelli (Meghan), Kelly Pinho (David), Miles Flanagan, Colleen Gurn, Alexandra Norelli, Mia Flanagan, Steven Norelli, Ethan Myers, Annalese Myers, Tim Woodard (Rebecca); four great-grandchildren Michael A. Norelli V, Vincenzo Norelli, Caterina Norelli, and Kaleb Woodard; and two brothers Arnold and Anthony (Mary Ann) Norelli. The Norelli Family would like to thank the staff at Ingersoll Place in Niskayuna for their care, compassion, and support throughout Michael’s residence the past year. Funeral Services will be held in the McVeigh Funeral Home (208 North Allen Street, Albany) Saturday, November 24, 2018 at 9:15am, and 10:00am at the Christ Our Light Catholic Church (1 Maria Drive, Loudonville) where his Funeral Mass will be celebrated. Relatives and friends are invited to visit with Michael’s family Friday, November 23, 2018 from 4:00pm to 7:00pm at the McVeigh Funeral Home. Interment will be in the Most Holy Redeemer Cemetery, Niskayuna immediately following the Mass. In lieu of flowers a donation in Michael’s memory to Capital City Rescue Mission 259 S. Pearl St., Albany, NY 12202 would be greatly appreciated.

The family of Michael A. Norelli Jr. created this Life Tributes page to make it easy to share your memories.

Send flowers to the Norelli family.