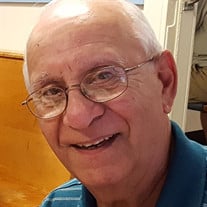 Albany- Michael Anthony Audino, 87, passed away quietly among family on February 23rd. Born on February 22, 1932, in Albany, New York, he was the son of the late John B. Audino and Teresa Travison. Michael was a 1949 graduate of Vincentian Institute High School in Albany. He graduated from Siena College in 1953 with a Bachelor of Arts degree in History. He was drafted into the Army’s Transportation Corps in February 1954 and spent the next two years as part of Korean War Post-conflict Occupation Forces stationed in Japan. Michael was a longtime communicant at the former St. Francis de Sales Church in Loudonville. After his military service, he married Caroline A. Keil, of Albany, in 1956. He worked in the insurance business from 1956 to 1964 working for both the John Hancock Insurance Company and the Mutual of Wausau Insurance Company. Michael started working for the Social Security Administration in 1964 and continued until his retirement in 1992. During this period, he worked in Social Security Offices in Albany, Schenectady, Gloversville, Auburn, NY and finished his career as the Manager of the Hudson, NY office. He remained lifelong friends with many of his co-workers from the Social Security Administration and valued these great friendships throughout the remainder of his life. Anyone who knew Michael knew he enjoyed reading, especially history, and was always abreast of current affairs and politics. He knew many things about many topics from his extensive love for reading. His favorite topics included the Revolutionary War, in particular Benedict Arnold, philosophy, poetry, and various religious topics. Love of his family and his love for all things educational were his most favorite interests. As a loving father and husband from a large Italian family, Michael always enjoyed interacting with his brothers, sister, cousins, nieces, and nephews. He loved to talk genealogy with his family. He was very proud of his roots and strongly believed in attendance at family gatherings and events as a way to keep the larger family together and aware of family lineage. After his retirement in 1992, he and his wife travelled the world to numerous locations including Italy, France, Germany, and England. Of all his travels, Michael loved his trips to Kennebunkport, Maine with his wife and son. From 1968 to the early 2000s, this annual pilgrimage was the highlight of his year. Many great memories were made in Kennebunkport. He was able to make two final trips there in 2016 and 2017 with his grandchildren. Michael loved to walk for exercise inside Colonie Center Mall and did so almost every day from the time of his retirement until a few months before his passing. After his daily walk he would read for two or three hours in the Barnes and Noble bookstore. He, again, made many, many friends during his time at Colonie Center engaging any and all in friendly conversation. He greatly valued these relationships, most notably with his niece, Roseann, who would join him in his walk on most days. In addition to his friends from work and from Colonie Center, he also valued the lengthy friendships he had with his neighbors. He lived in the same house for the last 49 years of his life and knew all of his neighbors and their children and was extremely appreciative for their friendship. Of particular note is the great friendship he had with his neighbors, Ronnie and Carol Gerasia, with whom he interacted with regularly. Notre Dame Football was also a major part of his life. Not a fall Saturday went by where he was not in front of the TV watching the game. Every Sunday included the post-game analysis and comparisons with his son, Michael. One of his last wishes was to see Notre Dame win one more National Championship before he passed. Unfortunately, that was not to be. Michael was predeceased by his wife, Caroline (2012), infant son Peter (1957), his brothers Fortune (Teresa), Carmon (Rose), John (Rosemary), and brother-in-law Joseph (Margaret) Keil. He is survived by his sister Immaculate (Dominick) Lizzi, sister-in-law Rosemarie (William) Steff, son Michael, daughter-in-law Patricia, grandchildren Jamie, Nicholas, and Katherine, great-granddaughter, Isabella, and many, many nieces, nephews, and cousins. Relatives and friends are invited to visit with Michael’s family Thursday, February 28, 2019 4:00 to 7:00 pm in McVeigh Funeral Home, 208 North Allen Street, Albany, NY 12206. Funeral services Friday, March 1, 2019 at 9:30 am at McVeigh Funeral Home, Albany thence to St. Pius X Church, Loudonville, NY at 10:00 am where his Funeral Mass will be celebrated. The Rite of Committal will be held at Our Lady of Angels Cemetery immediately following the Funeral Mass. In lieu of flowers, donations can be made to The Community Hospice, 310 S. Manning Blvd., Albany, NY 12208. To leave the family a special message, obtain directions, light a virtual candle or view other helpful services please visit www.McveighFuneralHome

Albany- Michael Anthony Audino, 87, passed away quietly among family on February 23rd. Born on February 22, 1932, in Albany, New York, he was the son of the late John B. Audino and Teresa Travison. Michael was a 1949 graduate of Vincentian... View Obituary & Service Information

The family of Michael A. Audino created this Life Tributes page to make it easy to share your memories.

Send flowers to the Audino family.