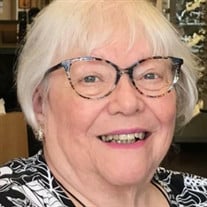 East Berne-Matilda Mary Nicklas Nagengast, 95, entered Eternal Life Saturday, February 6, 2021. Born in Albany, she was the daughter of the late George and Matilda Wilpers Nicklas. Tilli graduated from Vincentian Institute. Before marrying the love of her life, Bernard C. Nagengast in 1947 she worked as a claims insurance secretary. Bernie and Tilli remained devoted to one another for 62 years only ending with his passing in 2009. Family and faith were a constant strength in her life. Throughout the years she had briefly served on the Board of Directors for the Albany Child Guidance Center and Parson Child and Family Center. For 27 years she served on the Board of Directors for Rehabilitation Support Services (RSS) retiring in 2006. After moving to East Berne in 1973 Tilli became a devoted member of St. Bernadette’s Church in Berne, serving at different times as a teacher of Catholic Education, Eucharistic Minister, and Parish Counsel President. She also was a 30 year member of the American Legion Auxiliary. Tilli is survived by her children, Bernard (Carol), Richard, Joanne “Jody”, Mary Jean “MJ”, Mark, Kathryn Willsie (Ross), Anne Marie Place (Tim), Thomas (MaryEllen), Rosemary Hoffman (Jim) and Brian Nagengast; mother-in-law of Margaret Vogel-Nagengast. Also survived by 10 grandchildren and 7 great grandchildren. She was predeceased by her loving husband Bernie, her son Michael, and her sister Rose Mary Nicklas. Funeral services will be held privately. However a celebration of Tilli’s life will be held at a later date. Those wishing to remember Tilli Nagengast in a special way mays send a contribution to either Helderberg Ambulance, 978 Cole Hill Road, East Berne, NY 12059 or East Berne Fire House, 25 Main St., East Berne, NY 12059. To leave a message for the family, please visit www.McveighFuneralHome.com

The family of Matilda M. Nagengast created this Life Tributes page to make it easy to share your memories.