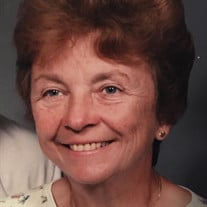 Albany-Mary Jane Kretzler passed away peacefully December 1, 2019 after a brief stay at the Teresian House in Albany. She was born May 12, 1937, in Albany to the late Kenneth G. Hunter and Josephine E. (Durand) Hunter. She was a graduate of the Cathedral Academy and Cortland State University. Mary Jane had a long and distinguished career as a teacher in the Albany City School District, spending the bulk of her career as an elementary school teacher at Albany Public School #19 on New Scotland Avenue. Retiring in 1994, she was admired and respected by her students and her peers. If you were to ask MJ about her favorite memories growing up in Albany, she would undoubtedly tell you they involved spending time with her father, whom she adored deeply, and helping him out at the family’s drug store. Hunter’s Pharmacy on Madison Ave was a local institution, fondly remembered by all who spent time in the neighborhood. MJ loved sports and was a fan of the New York Yankees. An athlete herself, she was an accomplished bowler and an avid golfer. She was a member at Western Turnpike Golf Course where she twice earned the title of Club Champion. She spent several winters in Florida after her retirement, enjoying golf, sunshine and the special company of her companion, the late Bob Cox of Guilderland. She always returned home to Albany for the warmer months, however, to enjoy her greatest treasure; her family. Mary Jane leaves behind her three beloved children; Karen (Dale) Gallacchi, Tom (Sheryl) Kretzler and Nancy Chrysogelos, as well as her six cherished grandchildren; Jason, Megan, Tommy, Katie, Carly and Ryan. She is also survived by her two brothers, Jim and Ken as well as a number of cousins, nieces and nephews. She was pre-deceased by her former husband, Thomas F. Kretzler of Albany. Relatives and friends are invited to visit with Mary Jane’s family Wednesday, December 4, 2019 4:00 pm to 7:00 pm at McVeigh Funeral Home, 208 North Allen Street, Albany, NY 12206. Funeral services Thursday, December 5, 2019 at 9:15 am at McVeigh Funeral Home, Albany thence to the Cathedral of the Immaculate Conception, Albany at 10:00 am where her Funeral Mass will be celebrated. The Rite of Committal will be held at St. Agnes Cemetery, Menands immediately following the Funeral Mass. To leave a message for the family, please visit www.McveighFuneralHome.com Those wishing to remember MJ in a special way may make a donation to the Michael J. Fox Foundation for Parkinson's Research, Grand Central Station, PO Box 4777, New York, NY 10163. michaeljfox.org

Albany-Mary Jane Kretzler passed away peacefully December 1, 2019 after a brief stay at the Teresian House in Albany. She was born May 12, 1937, in Albany to the late Kenneth G. Hunter and Josephine E. (Durand) Hunter. She was a graduate... View Obituary & Service Information

The family of Mary Jane Kretzler created this Life Tributes page to make it easy to share your memories.

Send flowers to the Kretzler family.