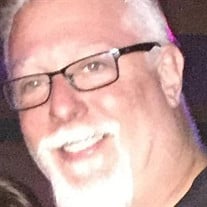 Climax - After a courageous battle with lymphoma, Mark Christopher Pelton, Sr., 52, entered eternal life on April 15, 2019 at New York Presbyterian/Columbia University Hospital surrounded by love with his devoted partner, Kim, and their children around him. Mark is the son of Helene McKeon Pelton and Donald Pelton, and the grandson of Hugh and Helene McKeon. Mark cherished his Irish heritage. He was a long-standing member of the North Albany Post 1610 American Legion and the North Albany Limericks where he enjoyed the company of his faithful friends and represented them in the Albany Saint Patrick’s Day parade each year carrying the 9/11 flag; the original Irish flag that was first carried by FDNY Engine #10 Fire Company and #10 Ladder Company, referred to as “10 House” in the New York City parade following the 9/11 attack. The Limericks have since had the honor of carrying this flag in remembrance of the Police, Fire, and Port Authority Members that gave their lives on 9/11. One of the great pleasures in Mark’s life was being a member of the Albany Irish Rowing Cub. A powerful rower, he was very actively involved in representing the Albany club in Currach races around the country while making lifelong friends along the way. He brought to his cancer battle the spirit of his favorite team “The Fighting Irish.” Having an abundance of the gift of Irish gab, Mark was a masterful story-teller who brought laughter and joy to all of us who knew him. Deeply devoted to family and friends, he was an amazing father who would do anything for his children. He lived life large and was always available to lend a strong or gentle helping hand to anyone in need. To know Mark was to love him and to be loved. A trusted, dependable, hard worker, Mark was employed for over 20 years in the elevator repair and construction business and was a Brother of the Elevator Constructors Local Union 35. Because of his vast experience and knowledge, he was asked to be an instructor for the union preparing and certifying workers in this very challenging and dangerous work. An Air Force veteran, he served our country both in active duty and reserves. Immediately following the 9/11 attack in New York City, he willingly and selflessly responded to the call to serve guard duty at ground zero. Years later, this exposure has been linked to his cancer. Mark was preceded in death by his mother, Helene, and his father, Don, as well as by his grandparents Hugh and Helene McKeon, his uncle David D. Morey and two cousins, Bart McKeon and Cheryl McKeon. He is survived by his most beloved partner, Kim McCarroll, his children Kayla, Veda (Adam), Mark Christopher Jr. and Veronica, Kim’s children Krystl, Alene and Mark, precious grandchildren Logan and Connor, Kim’s grand-daughter Jordan, step sons Nathan and Martin, step sister Diane, uncles Hugh (Bernie) McKeon of Atlanta, David (Margie) McKeon of Dallas, George (Dottie) McKeon of Phoenix and numerous cousins all of whom have been super supportive of Mark during his health challenges. As an only child, Mark was very close to his uncles, aunts and cousins. The family wishes to thank Kim for the extraordinarily loving and truly heroic way she took care of Mark during these past six months. All of us have witnessed true, unconditional love. We are deeply grateful for the amazing outpouring of prayer for Mark by family and friends, keenly aware of the huge difference this has made. In addition, we are thankful for the loving, and very professional care given to Mark during these last three months by the staff at New York Presbyterian/Columbia University Hospital, Harkness Pavilion as they guided him through the CAR-T cell therapy study and research. They took Mark in as a member of their family. Most of all we are grateful for the gift of Mark Pelton himself these 52 years….a man who loved God, loved family, loved friends and loved his country. Relatives and friends are invited to visit with Mark’s family on Saturday, May 4, 2019 from 9:00 -11:00 am in the McVeigh Funeral Home, 208 North Allen Street, Albany, to be immediately followed by a Catholic service and burial at St. Joseph’s Cemetery in Troy. The Family invites you to join them in a celebration of Mark at the North Albany 1610 Legion Post from 1:00-4:00 pm. In lieu of flowers, donations may be made to the “Fund the Fight” Memorial Fund to cover the cost of his medical care and other expenses incurred as a result of his extended illness. Fund contributions can be made to “Fund the Fight” at P.O. Box 3804, Schenectady, NY 12303. To leave Mark’s family a message on their guestbook, light a candle, obtain directions, or view other helpful services, please visit www.mcveighfuneralhome.com

The family of Mark C. Pelton created this Life Tributes page to make it easy to share your memories.

Climax - After a courageous battle with lymphoma, Mark Christopher...

Send flowers to the Pelton family.