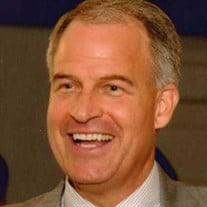 Altamont-Mark R. Burlingame “Burls”,60, peacefully entered into his Savior’s loving arms Monday, October 12, 2015, after an intense yet courageous battle with cancer. Mark was born in Little Falls, NY, son of the late Robert and Nancy Burlingame. He moved to the Westmere area as a young child and went on to graduate from Guilderland High School. Mark spent his early years on the ball field as his dad’s batboy at SUNY Albany. No doubt that is where he developed his love for the game and for sports in general. Mark went on to attend Oneonta College where he was later drafted into the Oneonta Yankees, playing shortstop. In 1977 he was brought up to the Fort Lauderdale Yankee Team where he played for a season. He was released from the minor leagues just after marrying his high school sweetheart, Beth Bidleman. Mark spent a few years as a Hallmark Rep in the North Country. After literally driving off the road one day, he decided to change careers and enter into funeral service. Mark devoted over 25 years to funeral directing, or as he referred to it , “the call.” He began his journey in Albany at the Frederick Funeral Home before moving to Altamont where he became a pillar in his family’s business at Fredendall Funeral Home. In all aspects of his life, Mark shared his love of God with others, expressed compassion for all people and provided service to his community and beyond. In 2007 he transitioned into Real Estate and played an integral role in building CM Fox and making it what it is today. Mark was an active member of the Altamont Reformed Church as well as the Guilderland Letterman Association. He previously served as president of the local Funeral Directors Association. Among many other invaluable traits, “Burls” will be remembered for his infectious smile, his passion for life, his love of people and his unparalleled dance moves. Mark is survived by his loving family; his wife, Beth, his son, Jason (Katie) Burlingame, his daughter, Kara (Mike) Banks, his grandson, Jack Burlingame, his sister, Wendy Reid, father and mother in law, Porter and Sally Bidleman, sister in law, Barbara Yohey, brother in law, Alan (Sharon) Kisby, an aunt, uncle and several cousins, nieces and nephews. He is predeceased by his parents, Robert and Nancy Burlingame and his sister in law, Mary Lou Kisby. Funeral services Saturday, October 17, 2015 at 12:00 pm at Christ the King Church, 20 Sumter Ave., Albany, NY 12203. Interment will immediately follow the Service at Prospect Hill Cemetery, Guilderland, NY. Relatives and friends are invited to visit with Mark’s family Friday, October 16, 2015 4:00 pm to 8:00 pm in the McVeigh Funeral Home, 208 North Allen Street, Albany, NY. In lieu of flowers, contributions may be made to the Good Samaritan Fund at Altamont Reformed Church, PO Box 671, Altamont, NY 12009 or The Guilderland Lettermen Association, C/O the McVeigh Funeral Home, 208 North Allen Street, Albany, NY 12206 or the Alzheimer’s Association Northeastern New York, 4 Pine West Plaza, Suite 405, Albany, NY 12205, or Memorial Sloan Kettering Cancer Center, PO Box 27106, New York, NY 10087-7106 (include a note the contribution is for Mark Burlingame). To leave a message for the family, view Mark’s Life Tribute, obtain directions, light a candle or view other helpful services please visit www.McveighfuneralHome.com

The family of Mark R. Burlingame "Burls" created this Life Tributes page to make it easy to share your memories.