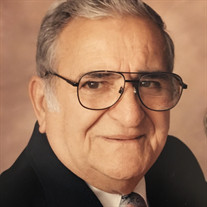 Albany - Mario J. Fedele, “Motts”, 89, passed away peacefully on August 9, 2017. Born in Rensselaer, he was the son of the late John and Angelina (D'Amore) Fedele. Motts graduated from St. John’s Academy, Rensselaer, NY, Class of 1946. While in school he excelled in every sport, playing side by side with his brothers. He was a lifelong avid sports fan, bowler and card player. A favorite pastime was going to Saratoga Night Track, especially when he owned his trotter, Milford’s First Son; in his later years he enjoyed traveling, OTB and bus trips to the casinos. From 1954-1976 he owned Fedele’s Market on Central Avenue in Colonie and was very proud of the neighborhood boys who worked for him (he is still fondly remembered as “the best boss ever”). He worked with his brother Joe at the Port of Albany Grocery Store on South Pearl Street in Albany, retiring in 1992. He continued working part-time as a butcher at Sysco, then Sam’s Club. He finished his career at Cardona’s Market in Albany again working alongside his brother. Motts joined his wife, Thelma, and their cousin, Shirley Commaroto, at St. Peter’s Nursing and Rehabilitation Center six months ago due to health issues. While there he was able to rekindle old friendships and also meet new friends whom he enjoyed reminiscing about ‘the good old days’. In addition to all the activities offered each day, he kept busy with jigsaw puzzles and never missed a bingo game. He is survived by his wife of 68 years, Thelma (Shuhart) Fedele; daughters Mary Carmody of Colonie and Marie “Tina” (Larry) Holford of Colonie. He is predeceased by his sons, Mark Fedele and infant son John Joseph Fedele. Brother of Salvatore (Rosemary) Fedele, and the late Rocco, Anthony, Peter, Joseph and Olivette Fedele and Lucy Mosser; father-in-law of the late Nancy Adalian Fedele; brother-in-law of Jennie Fedele, Helen Fedele, Louis and Dolores D’Ambrosi, Paul and Cathy Shuhart and Beverly Shuhart. Proud Grandfather “Pop” of Kimber-Lee (David) LaVenture and Tanner (Suzanne) Holford of Colonie, Michael (Alicia) Carmody of Weaverville, NC and Jacqueline (John) Rosati of Asheville, NC. “Pop” cherished being great-grandfather of Rhiannon Rose and Alexander LaVenture, Harrison Holford, TJ and Quinn Carmody and Dominic Rosati. He is also survived by many nieces and nephews. His family would like to thank the entire staff of dedicated nurses, aides, Pastoral Care, administrative, social work, maintenance, activities, his hairdresser Corina and the dining room staff at St. Peter’s Nursing and Rehabilitation Center and Hospice for their care and compassion, and “Table 9” whose antics made meals a social event. Relatives and friends are invited to visit with Mario’s family on Sunday, August 13, 2017 from 3:00 to 6:00 pm in the McVeigh Funeral Home, 208 North Allen Street, Albany. Funeral services on Monday, August 14, 2017 at 9:15 am from the McVeigh Funeral Home, thence to Christ Our Light Catholic Church, 1 Maria Drive, Loudonville at 10:00 am where his Funeral Mass will be celebrated by Reverend Anthony Chiaramonte. The Rite of Committal will immediately follow the Mass at St. Agnes Mausoleum, Menands. In lieu of flowers those who wish may send memorial contributions to St. Peter’s Nursing and Rehabilitation Center, 301 Hackett Blvd., Albany, NY 12208. To leave Mario’s family a message on their guestbook, light a candle, or view other helpful services, please visit www.mcveighfuneralhome.com

The family of Mario J. "Motts" Fedele created this Life Tributes page to make it easy to share your memories.

Send flowers to the Fedele family.