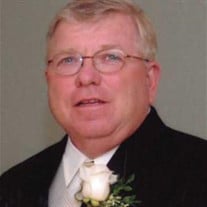 Albany - Kenneth J. Toomey, 77, passed away on September 7, 2019 at St. Peter’s Nursing and Rehabilitation Center after a seven year battle with Parkinson’s disease. Born in Albany on November 16, 1941, he was the son of the late William and Marion Toomey. Ken was the beloved husband of Carol Campbell Toomey for 54 years; a much loved Dad to Kevin (Kelly) Toomey of Berne, NY; Lisa Silipo of Albany, NY, Dan Toomey of Saratoga and Karen (Mike) Chenel of Voorheesville. Ken was “Grampy” to Cailyn and Quinn Toomey, Andrew and Olivia Silipo and Michael and Campbell Chenel. He is also survived by his sister Marion (Toomey)Jaquinto, brother Bill (Joanne) Toomey and sister Ann (Ray) Dwyer of Texas. Ken was predeceased by his brother-in-law Frank Jaquinto, his nieces Kathleen Jaquinto Gilligan and Mary Beth Toomey Dunne. Ken is also survived by his sister-in-laws Pat Campbell of Southport, CT., (Ed deceased), Connie & Bob Hurley of Peak’s Island, Maine, Eleanor Campbell of Saratoga (Pete deceased), and his brother-in-law Bob Campbell of Loudonville (Janet deceased). Ken is also survived by 33 nieces and nephews, several grandnieces and nephews, and one great grand niece and great grand nephews. He was predeceased by his niece Joan Grady. Ken was a graduate of St. Theresa of Avila, Albany, Christian Brothers Academy, Albany, Siena College and Albany Law School. Ken and Carol were married just before Ken began his senior year at Albany Law School. While Ken was at Siena College he was part of the R.O.T.C. After graduation from Albany Law School, Ken and Carol spent two years at Fort. Sill, Oklahoma where their first child Kevin was born. Upon returning to Albany, Ken began his career with New York State at first with the Department of Social Services, and then, subsequently, with the State Education and Public Employment Relations Board (PERB). He retired from PERB as Assistant Director, Public Employment Practices & Representation. After his retirement, he started his own arbitration practice with Carol as his secretary, who had a very hard time deciphering his writing. Ken loved the fifteen years that he and his family spent at the Trout Lake Club for their summer vacation. Ken also loved the game of golf and enjoyed his years at Tall Timbers Country Club and Pinehaven Country Club. He was very proud of the 3 holes-in-ones he achieved during his golfing career. Ken was a parishioner of Mater Christi Parish (formerly St. Catherine of Siena) for 44 years. He worked on the bazaar for many years, was on the Parish Council, and served as an usher and counter. He helped start the St. Catherine’s Girls Softball League and was a coach for several years. While President of the Men’s Association, he would organize a bus trip for a baseball game. The only field the bus would go to was Fenway Park to see his beloved Red Sox play. Ken and Carol traveled to Canada, Ireland, England, Mexico, Bermuda, Nassau and 19 states during their marriage. While in San Francisco, they danced down the Lombard Street stairs (carefully). A very special thank you to Dr. Richard Lavigne and his angel Colleen, Dr. Michael Martinelli, Dr. Jennifer Durphy and his very caring aide at home, Gayle Banks. A very special thank you to the entire staff of St. Peter’s Nursing and Rehabilitation Center for their wonderful and loving care of Ken. Those who wish to make a memorial contribution in Ken’s name may do so to CBA Scholarship Fund, 12 Airline Dr., Albany, NY 12205 or Hope Soars for Parkinson’s Research, Albany Medical Center Foundation, Office of Development, 43 New Scotland Ave. MC-119, Albany, NY 12208. Relatives and friends are invited to visit with Ken’s family Thursday, September 12, 2019 4:00 pm to 7:00 pm at McVeigh Funeral Home, 208 North Allen Street, Albany, N.Y. 12206. Funeral services Friday, September 13 at 10:00 am at the Parish of Mater Christi, Albany where his Funeral Mass will be celebrated. The Rite of Committal will be held at St. Agnes Cemetery, Menands immediately following the Funeral Mass. To leave a message for the family, please visit www.McveighFuneralHome.com

The family of Kenneth James Toomey created this Life Tributes page to make it easy to share your memories.

Send flowers to the Toomey family.