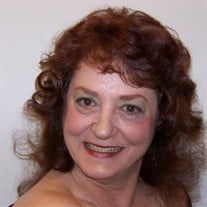 Cohoes-Kathleen A. (O'Connor) Engelhardt passed away peacefully at home on Wednesday, April 22, 2020. A graduate of Cardinal McCloskey High School in 1962, she worked over 35 years for the New York State Department of Education. She retired in 2004 as a supervisor of a Professional Licensing Unit. After her retirement she enjoyed participating in dance and acting. She would perform with different groups of performers, one of them being The Timeless Tappers. It was a great joy for her to perform in nursing homes and assisted living facilities bringing entertainment and happiness to members of the elderly community. Kathleen was also involved with many local theater groups. Some of her performances took place at Proctor's Theater, The Albany Civic Theater, Capital Rep, Confetti Stage, Indian Ladder and other venues. This was a great passion of her life for many years and she received recognition and awards for many of her roles. Kathleen was predeceased by her father and mother, Joseph F. O'Connor and Gertrude E. (Ketzer) O'Connor and her husband Gerald Engelhardt. She is survived by her daughter Stephanie A. (Daniel) Mahoney and her son Keith J. (Kelly) Cipollo as well as her grandchildren, Ryan J. Mahoney, Devin M. Mahoney, Brenna E. Mahoney, Isabella E. Cipollo and Joseph P. Cipollo. She leaves behind her sister Maryellen O'Connor, brother Joseph F. (Monica Lasher) O'Connor, Nephew Stephen J. O'Connor, Niece Amy R. O'Connor (Megan Yeats), Aunt Theresa Carter and numerous cousins. Due to the COVID-19 Pandemic, all services will be held privately. Contributions in her memory may be made to The Community Hospice, c/o St. Peter’s Hospital Foundation, Inc, 310 S. Manning Blvd., Albany, NY 12208 To leave a message for the family, please visit www.McveighFuneralHome.com

Cohoes-Kathleen A. (O'Connor) Engelhardt passed away peacefully at home on Wednesday, April 22, 2020. A graduate of Cardinal McCloskey High School in 1962, she worked over 35 years for the New York State Department of Education. She retired... View Obituary & Service Information

The family of Kathleen A. Engelhardt created this Life Tributes page to make it easy to share your memories.

Send flowers to the Engelhardt family.