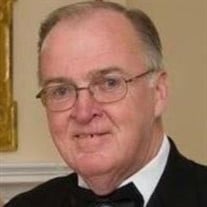 Clifton Park – Joseph T. (Bud) Mahon, Jr., 75, of Clifton Park and longtime Albany resident died Monday, May 18, 2020 peacefully at home. Born in Albany, he was the son of the late Joseph T. Sr. and Betty Riley Mahon. Bud was the patriarch of a boisterous Irish Catholic family. He was the beloved husband for 47 years to his high school sweetheart, Linda Snyder Mahon until her passing in 2012. He was the dear father of Joseph T. Mahon III (Maria) of Albany, Lisa Lynch (Joseph) of Marlborough, MA, Laura Garand (Michael) of Southborough, MA, Kimberly Henzel (Todd) of Clifton Park, and Michelle Mahon (David Sowinski) of Albany. He was the cherished Grandpa Bud of Conner Mahon, Ned and Cam Lynch, Riley, Shea and Nola Garand, TJ Reilly, Grace and Abigail Henzel and the late Ryan Mahon. He was the loving brother of Maureen Murgia (late Albert) and was predeceased by his infant sister Jean; brother-in-law of Jean Snyder (David Domino) and the late Katherine Snyder Fraller (Al); beloved uncle of Gregory Murgia (Lynn, daughters Nicole and Melissa), Maura Murgia (Darby Vedder) and Heather and Brandon Fraller. He also leaves his cherished companion, Marilyn Almy and many lifelong friends. Bud was born in Albany and graduated from Christian Brothers Academy and Braden’s Preparatory School before attending Siena College. He began his career working at The Modern Food Market while a student. He then went on to spend many decades with Albany International where he held several managerial roles in Appleton Wisconsin, Cowansville, Quebec and Atlanta, Georgia. Albany was always home base for the family. Later in his career, he joined New York State as the Director of the Payroll Implementation project to prepare the Office of the State Comptroller for the Y2K conversion. Bud was a devoted family man with a wicked sense of humor who loved nothing more than a house full of friends and family and a good vodka tonic (hold the fruit!). He had an affinity for cars, and was known to come home with new sports cars, much to Linda’s chagrin. He relished summer vacations on Cape Cod and enjoyed a day spent at the Saratoga Race Course, win or lose. Always a dog lover, he especially loved his Bernese Mountain Dogs, Seamus and Bentley. The family would like to express their appreciation for the loving care he received from Dr. Melissa Dalzell. Funeral services were held privately. Interment is at St. Patrick’s Cemetery, Watervliet. A celebration of his life will be forthcoming. Those wishing to remember Bud in a special way may send a contribution to the Cardiology Transplant Team at Boston Children's Hospital at bostonchildrens.org/givenow. or mail checks, payable to Boston Children's Hospital, to Boston Children’s Hospital Trust, 401 Park Drive Suite 602, Boston, MA 02215-5301. Please include his name in the memo line. To leave the family a special message on their guest book, please visit www.McveighFuneralHome.com

The family of Joseph T. Mahon Jr. created this Life Tributes page to make it easy to share your memories.

Send flowers to the Mahon family.