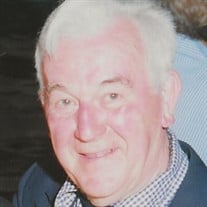 Albany-Joseph E. Fischer, 92, died peacefully at home Sunday, January 30, 2022 surrounded by his loving children after a long illness. Joseph was born on November 18, 1929 to the late Florence Maikowski Fischer and former Albany County Sheriff Edward M. Fischer. He was raised in Albany’s south end and graduated from his beloved St. John’s High School where he was a 3 sport standout in baseball, football and basketball. In 1991 he was inducted into the Bishop Maginn Sports Hall of Fame. He had a career batting average of .400 in baseball and he was a quarterback and team captain in football. In 1946 Joe was selected to play on the Albany All-Star Basketball team. After graduation Joe played baseball and basketball in the city leagues and went on to Fordham University. Joe married his high school sweetheart, Veronica Smolinski on September 17, 1950 and together they had a wonderful life until Veronica’s passing in 2012. Joe was employed by the former Tobin Packing Company as the Night Plant Superintendent for many years and also the Albany City School District. Together with his wife he later owned and operated the very successful Fischer’s Convenient Food Market in Loudon Plaza and later worked part time for SEFCU before fully retiring. Joe and his wife volunteered their time at the former St. Casimir’s Church and the American Red Cross. Joe was a long time communicant of St. Casimir’s Parish and a member of the Third Order of St. Francis. He was presently a parishioner and communicant of Blessed Sacrament Church. Joe’s greatest joy in life was his family and 5 children, especially the annual Cape Cod vacations, family picnics at Lake George and fun times in the backyard swimming pool. He loved the music at Tanglewood, Broadway musicals, Saratoga Race Track, casinos and the Boston Red Sox’s. Joe and Veronica had a wonderful time celebrating their 50th wedding anniversary with a trip to Europe including the Vatican. Joe was especially close to his late sister, Helen Fischer who passed away in January 2020. He is survived by his five children, John (Lisa) Fischer, Patricia (Michael) Abel, James (Barbara) Fischer, Mary Beth (Daniel) Cook and Thomas Fischer. Survivors also include his grandchildren Mary Beth Fischer, Kelly (Dave) DeGonza, Joseph Fischer, Elliot (Amanda) Cook, Jeremy (Ariel) Abel, Jessica Abel, Aubrey Cook, Michelle Bosma and Catherine (Sean) Roberts. He is also survived by 5 great grandchildren and several nieces, nephews and cousins. Relatives and friends are invited to visit with Joe’s family Friday, February 4, 2022 8:00 am to 10:00 am at the McVeigh Funeral Home, 208 North Allen Street, Albany, NY. Please only enter the funeral home from the rear parking lot doorway. Masks are required for everyone. His Funeral Mass will follow at 10:30 am at Blessed Sacrament Church, 607 Central Ave. (Father John Bradley Way) Albany, NY 12206. Masks are required for everyone. The Rite of Committal will be held at Our Lady of Angels Cemetery immediately following the Funeral Mass. Those wishing to remember Joseph E. Fischer in a special way may send a contribution to the Blessed Sacrament Food Pantry, 607 Central Ave., Albany, NY 12206. To leave a message for the family please visit www.McveighFuneralHome.com

The family of Joseph E. Fischer created this Life Tributes page to make it easy to share your memories.

Send flowers to the Fischer family.