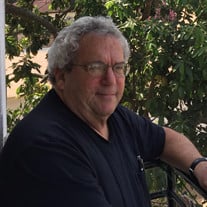 Poestenkill - It is with great sadness that we acknowledge the loss of our beloved husband, father, and friend, Jonathan Gradess after a brief illness. As with everything else in his life, he left us on his own terms with joy and peace in his heart on Wednesday, October 2, 2019. Jonathan was born August 5, 1947 in New York City the son of Edward and Ella Gradess. He was raised in New York and Connecticut but for the last thirty years called Poestenkill home. He was a member of the charter class of Hofstra University Law School and spent his entire professional career seeking justice for the downtrodden and disenfranchised among us. For thirty-nine years he was the executive director of the NYS Defenders Association in Albany and happily retired in 2017. He believed that everyone charged with a crime was entitled the best legal representation and he worked every day toward that end. During his career, he served on many boards and committees including Equal Justice USA, New Yorkers Against the Death Penalty, and the Commission on Restorative Justice of the Roman Catholic Diocese of Albany. He worked tirelessly to abolish the death penalty in New York and throughout the United States. After listening to the stories of the many Forgotten Victims of Attica (the prison employees killed or injured during the uprising), he joined their crusade and took their demands to the legislature and the Governor. While a member of St. Henry’s Parish in Averill Park, he started a program to provide furniture to recovering addicts taking the next step in their lives. Jonathan was a deeply spiritual man and his faith led him to see every human being he met as an encounter with the divine. He never wavered in this belief. Wherever he went he carried change in his pocket and offered it joyfully to those who asked for it. Jonathan is survived by his wife, Diane Geary, his sons Benjamin (Kelli), Michael and Sam, his brother Roger (Regina), sisters-in-law Joan Geary and Maryann Geary, brothers-in-law John Geary and Glenn Geary, nieces and nephew as well as his dear friend Colesvintong Florestal. A life-long lover of film, he shared this passion with his family. Jonathan spent many a wonderful afternoon at the Spectrum 8 movie theater. He will be missed by the ticket sellers and concession stand workers. He was certain their popcorn was the best! A celebration of Jonathan’s life will take place on Thursday, October 10, 4:00 pm at the Unitarian Universalist Society of Albany, 405 Washington Avenue, Albany. To leave a message for the family, please visit www.McveighFuneralHome.com In lieu of flowers we ask that you make a contribution to these organizations that were close to Jonathan’s heart: The Upper Room Inclusive Catholic Community https://www.upperroomicc.org/, NYS Defenders Association, and Equal Justice USA.

Poestenkill - It is with great sadness that we acknowledge the loss of our beloved husband, father, and friend, Jonathan Gradess after a brief illness. As with everything else in his life, he left us on his own terms with joy and peace in... View Obituary & Service Information

The family of Jonathan E. Gradess created this Life Tributes page to make it easy to share your memories.

Poestenkill - It is with great sadness that we acknowledge the...