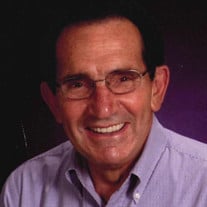 Albany-It is with broken hearts the family of John Michael Zanella must announce his passing into heaven on March 27 at the age of 81. He died very peacefully with his wife sitting next to him, holding his hand, after a short illness caused by a dental procedure infection that traveled into the valves of his heart and into his back. Born in Albany on May 25, 1938, he was the son of Michael and Elizabeth (King) Zanella. John graduated from Phillip Schuyler High School in 1957. He was named into the ‘All Albany’ football team for the Knickerbocker News and Times Union by his coaches in his senior year. He was also captain of his football team. In addition, he also attended Albany Business College in the early 70’s. John worked a variety of jobs while in school to help make ends meet at home. He had many stories about being a life guard at Mid City swimming pool in Albany when he was a teenager. While in high school he worked at Raymond print shop and Cromwell printing. It was printing that became his work passion and while he worked at several companies (Williams Press, served his printing apprenticeship at JR Condon & Sons) it was his almost 40 years with the Times Union (and Knickerbocker News) that continued to capture his love of printing and the newspaper. John started his career at the newspaper in 1961. He worked in the composing room until 1976 as a printer and was also promoted to night foreman. Then in 1976 as the composing room became more computerized, he joined the retail sales advertising department as a salesperson. He retired from this position in 2000. He loved the newspaper and the work he did there. Vacations became a big part of Barb and John’s life. It was beyond enjoyable to travel with special friends. Some of the areas they traveled to included: New Jersey Shore for family vacations (along with other families for more than two decades), Aruba (for multiple years), California, Florida, the Carolina’s, Georgia, Louisiana, Mississippi, Nevada, Texas, and so many more. John served our country in the US Army from 1962-64 and trained in Fort Gordon, Georgia. He was a member of the signal Corp, stationed in Okinawa for two years where he worked as a cryptographer. He was a proud member of the Italian Benevolent Society in Albany since 1958. His grandfather was one of the original founders of the IBS. John had many hobbies, not the least of which was golf as he was still playing last season, at least three times a week. Throughout his life he also enjoyed fishing, hunting, bowling, etc, etc, etc. However one of his greatest joys was the role of grandfather to his precious grandchildren, Austin and Alysa. He was an active presence in their lives from the moment they were born and it would bring an instant smile to his face when he saw them. John’s friends will attest to often hearing him announce “I’m the luckiest guy in the world.” He enjoyed life and cherished his family and his friendships for which there are many. In part, one of the reasons John could enjoy his life so much is because of some special doctors who served him well over the years finding health issues that would have shorten his life and getting him well again. We graciously thank these doctors and their staff. We would also thank the doctors, PA’s, nurses and staff at St. Peter’s Hospital during his recent stay there. Survivors include his wife, Barbara (Foster) Zanella; daughter Lori (Pendleton) Donato and son-in-law Bill Donato of Colonie; grandchildren Austin and Alysa Brino; brother Michael (Laureen) Zanella of Reisterstown, Md.; sister Donna (Bill) Parker of Cohoes; brother-in-law Paul Foster of Oskaloosa, Iowa; along with several nieces and nephews. Also surviving are his dearest friends who meant so much to him. Memorial donations could be made to the Wounded Warrior Project, P. O. Box 758516, Topeka, Kansas 66675-8516 or the Shriners Hospitals for Children, Attn: Office of Development, 2900 N. Rocky Point Dr., Tampa, FL 33607. Funeral services will be held privately due to the COVID-19 Pandemic at McVeigh Funeral Home, 208 North Allen Street, Albany, NY 12206. A celebration of life will be held at a later date. To leave a message for the family, please visit www.McveighFunealHome.com - 30 -

Albany-It is with broken hearts the family of John Michael Zanella must announce his passing into heaven on March 27 at the age of 81. He died very peacefully with his wife sitting next to him, holding his hand, after a short illness caused... View Obituary & Service Information

The family of John Michael Zanella created this Life Tributes page to make it easy to share your memories.

Albany-It is with broken hearts the family of John Michael Zanella...

Send flowers to the Zanella family.