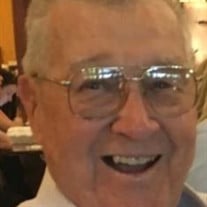 Loudonville-John Joseph Walsh, Sr. (Jack) died peacefully surrounded by his loving family on January 29, 2021. Born in South Troy on January 4, 1931, he was the son of the late Mary Devery and John H. Walsh and had 3 dedicated sisters who predeceased him: Marian Doring, Alma Walsh and Edna Kane as did several brother and sisters-in-laws. In 1958 Jack married his beloved wife Theresa M. Walsh (Kowalski) who he shared a wonderful marriage with. Theresa sadly passed away after 34 loving years of marriage. Jack and Theresa had strong family values and shortly after they married started a family of their own having 5 adoring children who all survive him: Mary Walsh Snyder (Tom), Loudonville, NY, Janice DeVito (Joe) Doylestown, PA, Judy Ashley (Tim) Purcellville, VA, John J. Walsh, Jr. (Jeanne) Guilderland, NY and Michael G. Walsh (Jennifer) Oklahoma City, OK. Jack was a dedicated grandfather and is survived by his loving grandchildren: Amanda Trinsey (Mike), Joey DeVito, James DeVito, Emily DeVito, Matt Snyder, John J (Jack) Walsh III, Lindsay Ashley, Jenna Walsh, Collin Ashley, Sean Walsh and Kara Snyder and his great-grandchildren: Hana and Elliana Trinsey and Sloane and Declan McKenna. Grandchildren Katherine DeVito and Kieran Walsh predeceased him. Jack is survived by two sisters-in-law and many nieces and nephews. Jack was proud of his South Troy upbringing and would often mention it whenever he could. As a young man he attended St. Joseph’s Elementary School and the original LaSalle Institute (’49) both in Troy. At LaSalle he played football and basketball and was named Captain of the basketball team. Jack was voted into the LaSalle Hall of Fame in 2006 along with many of his lifelong friends. Jack proudly served in the US Navy during the Korean War on the USS Aludra-AF-55 as 3rd Class Petty Officer with the 7th Fleet. During his tour he received ribbons for Korea Service, China Service, United Nations and National Defense Service and was honorably discharged on February 25, 1955. Jack was employed by the Great Atlantic & Pacific Tea Company (A&P) for 40 years and during his employment was the youngest Store Manager and District Manager having served in the latter position for 27 years before retiring in November 1989 to care for Theresa. Jack was a man of strong faith, he started his life as a parishioner of St. Joseph’s Church, South Troy, and then at St. Casimir’s Church in Albany for 42 years. At St. Casimir’s he served as Parish Council President and a member of the Holy Name Society. At the time of his death, Jack was a parishioner at St. Pius X Church, in Loudonville. Jack was a member of The American Legion, Joseph E. Zaloga Post 1520 since 1969 and the Navy Petty Officer’s Club in Troy. Jack loved family vacations in Cape Cod with Theresa and their children. Later in life he was fortunate to enjoy trips to Florida, Las Vegas, Aruba and Ireland with family and friends. Jack was very proud of his children, grandchildren and great-grandchildren traveling out of state to spend time with them attending countless birthdays and special events. He was fortunate to reconnect with many of his LaSalle classmates swapping old stories at Saturday morning coffee at Panera with them. He enjoyed the special times he spent with Dorey DeVita and her family, daily Mass at St. Pius and the coffee group afterwards and his workouts and swim class at the Rudy Ciccotti Center. Jack was a life-long Notre Dame football fan and could often be seen wearing a ND hat or shirt. Because of covid, the funeral service for Jack will be held privately with the assistance of McVeigh Funeral Home, 208 N. Allen Street, Albany, NY. A Mass celebrating his life will be held in the future and will be posted in the paper. In lieu of flowers, for those who wish to remember Jack, they may make a memorial contribution to PKD (Polycystic Kidney Disease) Foundation, 1001 E 101st Terrace #220, Kansas City, MO 64131 or via link https://support.pkdcure.org/give/319374/#!/donation/checkout . The family would like to thank the staff at Loudonville Assisted Living for all the care, love and compassion that they gave our Dad and Poppy over these 2 years. The staff took care of him as if he was their family.

Loudonville-John Joseph Walsh, Sr. (Jack) died peacefully surrounded by his loving family on January 29, 2021. Born in South Troy on January 4, 1931, he was the son of the late Mary Devery and John H. Walsh and had 3 dedicated sisters who predeceased... View Obituary & Service Information

The family of John J. Walsh Sr created this Life Tributes page to make it easy to share your memories.