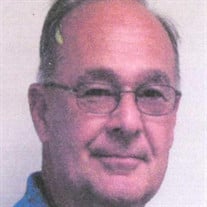 Albany – John F. Vergare, 77, passed away peacefully on Tuesday, May 12, 2020, after a long illness. He was born in Albany on August 9, 1942, son of the late John and Thelma Webster Vergare. He graduated from St. Joseph’s academy in 1960. As a senior he played All Albany Basketball and pitched in the Hersch Sandlot All-Star Classic at Yankee Stadium. John served his country in the Air National Guard for 6 years. He worked for the US Postal service for 38 years. After retirement he worked for Colonie Senior Service Center. John was kind, generous, and hard-working. He enjoyed hunting and taking his children and grandchildren fishing. John loved animals especially his dog Brita. He enjoyed watching and playing sports including golf, basketball, and baseball. His greatest joy was spending time with his family and friends. He is survived by his wife of 55 years Janet Vergare; his brother Tony Vergare; his children Christopher (Christine) Vergare, Lauren Shpigler, and John D. Vergare; his 9 grandchildren Amanda Shpigler, Daniel Shpigler, Hannah Shpigler, Andrew Vergare, Evan Vergare, Marissa Vergare, Laila Shpigler, Greer Shpigler, and Piper Shpigler, and his great grand-daughter Aria Vergare. He was pre-deceased by his in-laws Daniel J. Fitzpatrick and Anne M. Murphy Fitzpatrick, and his grandson Samuel Shpigler. Special thanks to the caring doctors and nurses at St. Peter’s Hospital. A private funeral service will be at the McVeigh Funeral Home with Father Kenneth Doyle presiding. Inurnment will be in St. Agnes Cemetery in Menands. Contributions in John’s memory may be made to Mohawk Hudson Humane Society at 3 Oakland Ave. Menands, NY 12204 or the Capital City Rescue Mission at 259 S. Pearl St. Albany, NY 12202. If you would like to send a message to the family, please visit www.McVeighFuneralHome.com.

The family of John F. Vergare created this Life Tributes page to make it easy to share your memories.

Send flowers to the Vergare family.