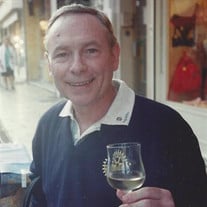 John F. (Jack) Thornton Jr. was called home by his God suddenly on December 29, 2017. Born in Albany on January 31, 1937, to the late John Thornton Sr. and the late Anna (Dillon) Thornton, Jack was also predeceased by his siblings Anne, Mary, and William. Educated at Cathedral High School and later receiving his degree from Russel Sage, Jack was the first in his family to graduate from college, learning from his own parents that education and hard work was one way to the American dream. Despite Jack’s lifelong love for his Irish Heritage, he was all American and achieved that dream and so much more. Starting in the mailroom of the Albany Times Union at age 17, Jack remained a loyal and enthusiastic employee for the paper until he retired 44 years later. Nicknamed “Mr. Times Union” because he rose in the company from sales, marketing and finally, to Public Relations Manager, Jack became an ambassador for good by representing the Times Union to benefit many community programs that served populations that were often forgotten by others. Working for the Times Union and as a longtime Rotary member and President in 1998, Jack served on many boards, all not for profit agencies or universities that represented Jack’s core values well: that everyone deserved an equal chance to reach their fullest potential. Jack’s proudest accomplishment, establishing through Rotary a scholarship program at the College of St. Rose, still exists today because of Jack’s tireless efforts to make college a reality for anyone who wanted to learn. Throughout his life, Jack represented the very best in this country, this city, and his faith community. Born a devout Catholic, Jack demonstrated every day of his life that faith plus action could change the world, one small corner at a time. While passionate about his work, Jack’s heart belonged to his family, and he and his beloved wife Dorothy often referred to themselves as “two kids from the South End” in later years, when the success they worked for led them to the adventures they dreamed of. High school sweethearts, Jack and Dorothy remained married for 60 years, during which time they travelled the world, to Greece, Italy, the Caribbean, Alaska, and of course Jack’s beloved Ireland. They danced together beautifully, especially to their wedding song, Stardust, when Dorothy would reach up and lovingly pat Jack on the cheek. They shared a love of the Yankees, good wine, good food and being with family. Survivors include his beloved wife Dorothy, his sisters who gave him great joy, and more than a few jabs, Cathy (Jim) McQuade, Ruth (late husband George) Rose, and Patty (Walt) Decker, and his children: Jack Thornton, Voorheesville, NY; Carla (Daniel) Clayton, Colonie, NY; Patricia (Gregory) Johnson, Aitken, South Carolina, and twins Christine (Christopher) Fris, Coral Springs, Florida, and Geraldine (Albert) Stella, Voorheesville, NY. Jack’s children inherited the very best of him; his only son Jack could light up a room or diffuse an argument moments after arriving, his daughter Carla followed her father’s passion for reaching out to alleviate suffering by offering unconditional compassion; his daughter Patricia by reaching the pinnacle of a career in science that ensures safety in the nuclear energy industry; his daughter Geraldine by fighting through her Union, PEF, and USW to protect the rights of workers everywhere, and Christine by healing others through yoga, faith communities, tireless volunteer work for many social causes, and who in Jack’s final years, when his great heart grew tired and his health fragile, literally kept her father alive through sheer force of love, time, researching doctors and clinical trials and when all else failed, threatening to cut off his Guinness if he didn’t follow doctor’s orders. We are forever grateful to “Sheriff North”, Geraldine, and “Sheriff South”, Christine, for keeping our beloved father here until God called him home. As a man whose faith in God never wavered, Jack never worried about finding a place to worship; living in many cities with many Churches, Jack always knew exactly where to find God, and those who knew Jack realized quickly that he carried his faith in his heart and knew he was never alone. Jack’s faith was simple but steadfast: do unto others as you would have them do unto you. His children will spend the rest of their lives trying to practice what Jack lived. Blessed with four grandsons, Marcus, Ryan, Jack, and Joseph, all of whom adored their “Pop” and “Papa”, Jack’s family is comforted by seeing the same traits in his grandsons that made him so irreplaceable…a spark, a smile, fierce loyalty, and tireless love. The family would also like to thank his loving caregiver, Marie Mesidort, an angel who brought joy into his life every day. We can’t thank her enough for everything she has done for our family. Anyone wishing to donate to the scholarship Jack loved may do so at: Rotary Scholarship at the College of St. Rose, 432 Western Avenue, Albany NY 12203 or call 518-454-5114. Services are planned for Thursday January 4th and Friday January 5th, 2018. Family and friends may call from Thursday, January 4th, from 4:00 to 7:00 pm at McVeigh Funeral Home in Albany, with a Mass of Christian burial on Friday, January 5th, 9:00 am at Blessed Sacrament Church, in Albany, followed by an interment at St. Agnes Cemetery in Menands.

The family of John F. Thornton Jr. created this Life Tributes page to make it easy to share your memories.

Send flowers to the Thornton family.