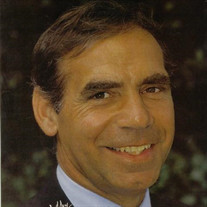 Albany-John E. Soffey, Jr., 76, beloved husband of Ellen (Sis) Banker Soffey, died Saturday, May 12, 2018 in Naples, FL after a long illness. Born and raised in Albany, NY, John was the son of the late John E. Soffey, Sr. and Rose Soffey of Albany. He was a graduate of Vincentian Institute (’59) and Hamilton College (’63). John was employed by the State of New York, retiring as Director of Personnel for the Civil Service Department. An All-Albany football player at Vincentian Institute, John was a distinguished running back at Hamilton College, where he was also a member of the Psi Upsilon Fraternity. After graduation, to remain involved in athletics, John officiated local sports games. He began his career as a college football official in 1972 with the Eastern College Athletic Conference and then, in 1984, with the Collegiate Independents Football Officiating Association. From the league’s inception in 1991 through 1994, John was an on-field referee for Big East football and was, in fact, the referee for the very first Big East football game. He was supervisor of officiating for the Atlantic-10 Conference from 1995-97 and subsequently became Coordinator of Football Officiating for the Big East from 1998 through 2007. He officiated major college bowl games as well as the Kickoff Classic and Army-Navy games. He was inducted into the Capital Region Football Hall of Fame in 2011. A natural athlete throughout his life, John was an avid tennis player and golfer as a member of Normanside Country Club, Delmar, NY and Naples Heritage Golf Club, Naples, FL. John is survived by his wife, Ellen of Naples, FL, his daughters Laura (Albert) Spada of Westport, CT; Kim (Paul Cully) Soffey of Scottsdale, AZ; Kate Soffey (Stuart Cleary) of London, UK; and Beth (Dave) Parker of Wilmette, IL; four grandchildren, Matthew Spada, Katherine Spada, Sage Parker and Quinn Cleary; brothers Francis (Martha) of Naples, FL; Richard (Marie) of Chatham, MA and their children Jennifer McCassey and Joseph Soffey; sister Donna of Cohoes, NY; and cousins Dr. Frank (Joann) Cicero, Viola (Robert) D’Anza , Grace (Les)Farrow, Frank (Penny) Tomaro and John (Linda) Tomaro. The family would like to extend its sincere gratitude to the staffs at Arden Court, Naples, FL and Atria, Guilderland, NY, who helped care for John during his illness. Relatives and friends are invited to visit with John’s family Tuesday, May 22, 2018 5:00 pm to 7:00 pm in McVeigh Funeral Home, 208 North Allen Street, Albany, NY. Funeral services Wednesday, May 23, 2018 at 9:00 am at Blessed Sacrament Church, 607 Central Ave., Albany, NY 12206. The Rite of Committal will be held in St. Agnes Cemetery, immediately following the Funeral Mass. To leave a special message for the family, light a candle, obtain directions or view other helpful services please visit www.McveighFuneralHome.com In lieu of flowers, contributions in memory of John may be made to Blessed Sacrament Church, Albany, NY or to the Alzheimer’s Association.

The family of John E. Soffey Jr created this Life Tributes page to make it easy to share your memories.

Send flowers to the Soffey family.