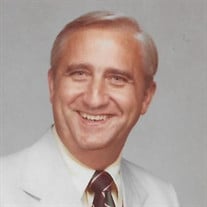 Albany - John Pioggia Jr., devoted and loving husband, father, grandfather, brother-in-law, uncle and friend, entered into Eternal Life on July 23, 2019 at his home surrounded by his loving family. Born in Albany on August 1, 1932, John was the son of the late John Pioggia, Sr. and Antoinette Lupo Pioggia who immigrated from Bernalda, Italy in the early 1900’s. John was a strong, kind and humble man. John lived his entire life in his beloved city of Albany. His earlier years were spent in the Italian and multi-cultural community of Albany’s South End. This rich heritage paved the way for his role in the 2015 film, “ECHOES From The Neighborhood That Disappeared” and also the Bob Paley film, “More than Words.” Upon graduating from Philip Schuyler High School in 1950, John began his 40 year career with the New York Telephone Company and shortly thereafter was drafted into the US Army in November 1952. He served during the Korean War and saw combat at Christmas Hill with the 180th Infantry Regiment of the 45th Thunderbirds Division. John rarely spoke of his time in Korea but felt his experiences created in him a profound sense of gratitude for those in his life. He loved them, unconditionally. He received an honorable discharge in September 1954 and remained in the inactive reserves for 8 years. After his military service in Korea, John returned to the New York Telephone Company spending 20 years in the field and an additional 20 years in sales and marketing management. John married the love of his life, Virginia Reardon Pioggia on June 14, 1958. Their 61 years of marriage is a testament to enduring love. They shared a deep love of family, friends and travel which took them back to John’s family in Italy numerous times. John was a communicant of the Parish of Mater Christi in Albany and during his lifetime was active in the Knights of Columbus, the American Legion and the Italian American Community Center in Albany. Survivors in addition to his loving wife include his devoted sons Andrew and Michael (Jennifer); his cherished grandchildren Andrew Jr., Isabella and Sophia; sister, Mary Martin and several nieces and nephews. John was the youngest brother of the late Angelina, Frank and Danny of Albany and Tony of Taranto, Italy. Relatives and friends are invited to visit with the family at the McVeigh Funeral Home on North Allen St., Albany, NY on Friday, July 26, 2019 from 4:00pm to 7:00pm. Funeral services will be held at the Parish of Mater Christi, 40 Hopewell St., Albany at 12:00pm on July 27, 2019 where his Funeral Mass will be celebrated. The Rite of Committal will be held at St. Agnes Cemetery, Menands immediately following the Mass. Memorial contributions may be made to The Community Hospice, 310 S. Manning Blvd, Albany, NY 12208 in memory of John Pioggia Jr. or to a charity of your choice. To leave a special message for the family, please visit www.McveighFuneralHome.com

The family of John Pioggia Jr created this Life Tributes page to make it easy to share your memories.

Send flowers to the Pioggia family.